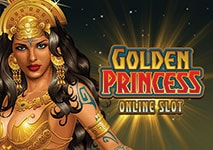 The culture of the Aztec civilization has laid the foundations of a constantly swelling list of Aztec-themed slots and Golden Princess is only one of the numerous examples. This colorful game can be found at many online casinos powered by Microgaming and features 5 reels, 3 rows, and 25 adjustable paylines players can score wins on.

The design of the game is reminiscent of some of the older titles from the Microgaming portfolio but this is only understandable considering the game has been released in 2015. The graphics and animations do seem a bit dated but the developers have compensated with a generous paytable and enough bonus features to keep you on the edge on your seat for quite a long time.

Reel spinners are assisted in securing wins by wild and scattered symbols but there is also a round of free spins with huge multipliers on the profits as well as a gamble functionality. The betting limits are generally rather flexible but can vary in different online casinos powered by Microgaming since the software is configurable and allows operators to modify the coin denominations. Other than that, players can adjust the number of lines they bet on and stake up to 10 coins per spin. 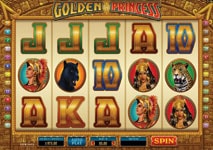 As we have hinted already, Golden Princess was inspired by the Aztec civilization and this truly shows from the design of the game. The name of this slot is quite fitting since the entire reels are encased in gold with elaborate embellishments in Aztec style. The gaming control buttons are styled in a similar manner.

The slot’s logo is positioned above the five reels. As simplistic as it is, the whole background is animated and you can see the golden ornaments glittering every once in a while. The symbols take most of the space available on the base-game screen, which is indeed a common trait many Microgaming slots share.

Speaking of symbols, these all are carefully chosen so they relate to the Aztec theme. There is a richly adorned Aztec priestess or princess, wearing a golden feathered crown on her head. You can also form winning combinations with the assistance of an Aztec warrior, a black panther, and a jaguar. The symbols are animated but they need to align on a payline in order to be brought to life.

The symbols of lower value are also designed in correspondence with the game’s opulent theme. They feature the playing card initials we have all grown accustomed to but these are decorated with the typical Aztec embellishments and appear as if they are made of gold.

The Microgaming developers have created a rather lucrative slot where the paytable and the symbols are concerned. The game offers four high payers, namely the symbols containing the priestess, the warrior, the jaguar, and the black panther.

We ranked these in descending order, which is to say the priestess returns the largest prize of 50,000 coins, followed by the warrior who awards up to 20,000 coins, the jaguar with up to 10,000 coins, and the panther which pays out 4,000 times the line bet. As you can see, this paytable is way above average which, at least partially, compensates for the slightly outdated feel of the game.

Then again, we have the usual low-value symbols with the playing cards but the payouts these render are actually not that low at all. In fact, the lowest prize you can get is awarded for 5-of-a-kind with 10s and amounts to 600 coins. The maximum you can squeeze out of Golden Princess stands at 2,000 coins but the precise amount depends on your coin denomination.

The developers have included a wild symbol for substitution and it contains the Golden Princess logo with an Aztec temple visible in the background. The wild can appear both during the main game and during free spins but it is more lucrative in the bonus feature. This is so because the wild has a random multiplier attached to it during free spins and can multiply the wins it helps you form by 2x or 3x.

There is a scatter symbol, of course, since we need something to activate the free spins round with. The scatter in question is represented by a large decorated chest embellished with gold, full of coins and gemstones.

Golden Princess lacks one essential special feature and it is the bonus side game. But balancing things out is apparently a specialty of the software experts over at Microgaming since they have compensated for the omission of the bonus game with a very generous round of free spins. The free spins are triggered by landing a minimum of 3 scattered chests in any position on the reels which awards 10 free games. Those who land 4 scatters on the same spin receive a higher number of 20 free spins. The maximum of 30 free games goes to the spinner who hits 5 scattered chests.

The developers have come up with a very ingenious way to increase the profitability of this bonus feature even more. First of all, the wild symbols stack during free spins which leads to more winning combinations for the player. And second, whenever a scattered chest appears on the reels during the feature, it surprises the player with a mystery payout that can amount to up to 10 times the overall bet. On the downside, the free spins cannot be retriggered by the same scatter combination.

You will see a button that reads “Gamble” which is located directly above the Spin button. It gets activated after each winning spin in the base game and provides you with the opportunity to double or quadruple your profits on the last round. For the purpose, you need to either guess the color of a playing card’s suit or its suit. If you do not succeed, you will lose the win on the last spin.

Golden Princess may not be as visually impressive as some of the latest additions to the Microgaming slot library but it still deserves to be given a chance. Players can win up to 125,000 credits and we believe this serves as a sufficient incentive to give the reels of Golden Princess a whirl.