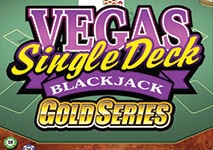 If you are one of those players who find it difficult to choose between the American and European versions of the popular card game, world-class software supplier Microgaming has come up with the perfect alternative for you. The game in question is called Vegas Single Deck Blackjack and offers you the best of both worlds in a premium package.

The game is part of Microgaming’s Gold Series and offers enhanced graphics and animations, immersive sounds, and an easily understandable interface to the benefit of inexperienced players. To boot, it provides blackjack fans with a nice range of tweakable features allowing them to extract maximum value from the game.

Vegas Single Deck Blackjack combines American and European rules. The dealer receives one hole and one up card but the rules pertaining to splitting and doubling down are a bit rigid, similarly to those in the European variation of the game where the dealer is initially dealt only one up card. Other than that, Vegas Single Deck Blackjack plays smoothly and is an absolute must for any self-respecting fan of 21 out there. 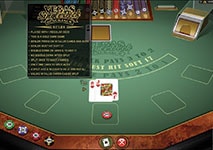 Vegas Single Deck Blackjack is a step forward from the older blackjack variations released by Microgaming. If you have played one of the older games, you will immediately notice the visuals have been greatly improved in this version. The graphics are beautifully rendered, which enhances the enjoyment of playing the game. The same applies to the masterful animations which leave you wondering whether you are not sitting at a real blackjack table.

The immersive sound effects make the game even more enjoyable as they are incredibly realistic. The virtual dealer urges players to make a bet and announces the total of each hand played at the table. You can even hear the swishing sounds of the cards being dealt on the layout. The ambiance at the virtual table is complemented by the soft piano music playing in the background. The dealer’s urging you to make a bet tends to get a bit repetitive but this issue is easy to solve. All you have to do is turn the sound effects off.

The layout basically features everything one would expect to see at a regular blackjack table, including the rack for the chips, the dealer rules on the felt, the paddle used for pushing money into the drop-box, the plaque with the limits, and the betting boxes. Here it is important to mention that the game allows you to play only one hand at a time despite the fact there are five betting boxes on the layout. You can use only one of those while the remaining four are there for aesthetic reasons only.

Microgaming has once again succeeded in creating a game that is suitable for blackjack players of all persuasions. You can jump right into the action no matter what size your starting bankroll is. Here it is important to clarify that Microgaming’s software is configurable which means each casino utilizing the platform can set its own limits on the virtual games it offers. Because of this, the minimum and maximum bets at the Vegas Single Deck Blackjack table may vary between online gambling operators.

However, in many instances, the game is playable from as little as $1.00 which renders it the perfect option for players with limited bankrolls. Yet, this variation is also suitable for blackjack fans from the higher betting spectrum, allowing them to stake as much as $200 per hand.

You start by adjusting your bet size, with the option to choose from chips of different values like $1, $5, $10, $25, $50, $100, and $200. Once you have selected the chips of your preferred value, all you have to do is click on the middle betting box and hit the Deal button to get dealt some cards.

The gaming controls are rather easy to operate with, even if this is your first experience at the virtual blackjack tables. If you have made the wrong size of bet, you can easily fix the mistake by using the Clear Bet button. Players who hate to vary the size of their bets would greatly appreciate the addition of the Rebet button, which allows them to flat bet with a single click.

Many blackjack players prefer to engage in multiple deck games since the latter offer more favorable rules. In other words, you most likely will not be thrilled by the rules applying in Vegas Single Deck Blackjack if you are used to playing multiple decks.

As the name implies, this variation is played with one deck of 52 cards and these are reshuffled by the software after each coup. The standing rules for the dealer require them to hit on soft totals of 17. Insurance is offered when the dealer’s up card is an Ace and winning side bets of this type return at the standard rate of 2 to 1. Other than that, naturals earn you payouts of 3 to 2.

The game differs from European single-deck variations in that hole cards are in play, i.e. the dealer receives one card facing up and one card that faces down. One advantageous rule requires the dealer to peek for naturals when showing Aces as well as ten-value cards.

The rules pertaining to splitting and doubling are not that great, though. You can split any pair you like, with the exception of pairs consisting of unlike ten-value cards. When splitting Aces, you are dealt only one card on each Ace. Re-splitting is not an option in Vegas Single Deck Blackjack. Doubling down is allowed only on hard totals of 9, 10, and 11 – a rule many blackjack players find restrictive and would frown upon. Also, the game prohibits you from doubling down on split pairs.

In addition, the game offers three very useful functionalities which enable you to tailor the gameplay to your own pace and preferences. You can keep track of previous results by opening the Statistics menu but this is an option only for those who play for real money. Another handy feature is Auto Rebet, which allows you to wager the same stake repeatedly and is perfect for those of you who flat bet. Last but not least, we have the Quick Bet feature which speeds up the entire gameplay.

To summarize what we have said so far, this Microgaming offering is perfect for players who prefer single-deck over shoe games. The variation is easy on the eye thanks to its superb graphics and offers a very intuitive interface to suit all blackjack fans. Despite its less favorable rules, Vegas Single Deck Blackjack offers a low house edge and is considered a must-try for all blackjack fans out there.