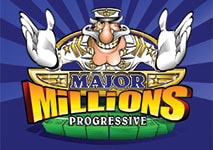 Major Millions is one of those slots that has acquired somewhat of a legendary status among reel spinners. The game has been around for quite some time now, being released by software supplier Microgaming back in 2000. The slot is available in two different versions, one of which plays over 3 reels and 3 paylines while the second one features 5 reels and 15 adjustable winning lines. Our review focuses predominantly on the slot’s 5-reel version.

The continued popularity the game enjoys can be attributed to the immense progressive jackpot it is linked to. The pot starts seeding at a quarter of a million, allowing lucky players to pocket a handsome reward when betting real money. Major Millions is one of those Microgaming slots that has stood the test of time, remaining popular despite its slightly out-of-style feel. It comes with a distinctly military theme, complemented by appropriate thematic symbols. Major Millions supports bets of one coin per active payline, with a fixed denomination of $0.20 and a maximum bet of $3.00 on each spin. 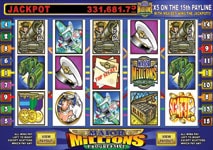 The Major this Microgaming slot borrows its name from is in fact an agreeable aviation officer that dominates the theme of the slot. The symbols that can help you score a hefty payout all relate to the aviation theme of the slot so winning combinations can be formed with icons containing pairs of binoculars, tanks, warships, planes, ammunition boxes, and medals. Since Major Millions is the character the game is named after, it is only fitting his is the highest paying regular symbol here.

The design of the slot is somewhat simplistic and the symbols rotate against a uniform blue background, with the Major Millions logo positioned below the five reels. Since this is one of the older slot offerings from Microgaming, not much is going on in terms of animations. The symbols forming winning combinations are not animated, either.

Military parade music predominates the gameplay, which tends to get a bit repetitive after a while. Multiple winning combinations on several paylines are accompanied by drum cadence effects in accordance with the military theme of Major Millions.

Major Millions may be one of the older products on Microgaming’s portfolio but it features none of the usual high-playing card symbols for the low-value winning combinations. All symbols in use correspond to the military theme of the game, including the low payers like the binoculars, the Major’s cap, the ammunition box, and the medals, which can earn you anywhere between 2 and 160 coins.

The high-value symbols return prizes ranging between 6 and 1,000 coins and can be ranked in ascending order as follows – the top-secret documents, the tanks, the bomber planes, the warship, and finally, the highest regular payer, the Major himself.

The developers have included a scattered symbol which returns up to 50 coins for five matches but it has no other function other than that. However, the scatter can create winning combinations as long as the identical symbols end up on adjacent reels. They do not have to align on active paylines to return a prize.

Undoubtedly, the most important symbol in Major Millions is the wild containing the game’s logo. It is the top payer here, offering a payout of 8,000 credits to those who align five wilds on a payline. Apart from awarding the highest regular prizes in the game, the wilds can replace other icons on the paylines which results in more winning combinations. They also triple all the wins they participate in with a 3x multiplier. 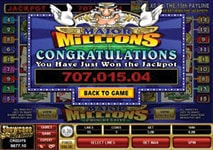 It should be noted that in order to create a winning combination, the symbols in Major Millions need to align from left to right on the paylines. This is valid for all symbols with the exception of the scatter which creates wins in both directions on neighboring reels. Only the largest win is paid per active payline.

Yet, the biggest incentive for players to continuously bet on a graphically outdated game like Major Millions is the progressive jackpot. Microgaming contributes with a seed amount of $250,000 and players can check the size the pot has currently reached in the jackpot meter placed at the top of the base-game screen. The jackpot hits relatively often and is won once every six weeks on average, rewarding lucky chance-takers with six-figure payouts. Both the 3-reel and the 5-reel versions of the slot are connected to the jackpot network so the progressive prize increases whenever bets are made on any of the two games.

But enough about that, you probably are curious as to what conditions you need to meet in order to scoop the huge prize. To begin with, you must activate and play all 15 paylines, placing the maximum bet of $3.00 per spin. Otherwise you will not be awarded the pot, even if you do succeed in completing the triggering combination.

The wild is the key symbol to watch out for if you are aiming for the progressive pot. In order to win the jackpot, you need to align 5 wild symbols on payline number 15, which starts at the lower left hand corner, zigzags across the middle of the screen and end in the bottom right hand corner.

When it comes to progressive slots, the most efficient way to measure their popularity is to look at the size of their jackpot. Major Millions may be one of the older releases by Microgaming but it shows no signs of slowing down. The game remains as popular as ever as becomes apparent from the huge amounts its progressive jackpot continues to reach to this day. Do give it a spin, even if you prefer more graphically advanced games. One never knows when the jackpot symbols will align on the qualifying payline.