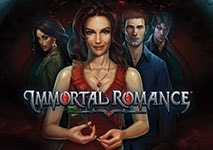 Immortal Romance is a wonderful online slot powered by the leading software company Microgaming. It leads players to the mysterious and dark world of vampires, witches and other unknown creatures. The game has a fun theme which a lot of people might find intriguing.

In addition to its fun design and story, Immortal Romance knows how to boost the gaming balance of players and make their spinning adventure very fruitful. This online slot has 5 reels and it offers 243 ways to sweep a rewarding payout. With Wild and Scatter symbols and Bonus features that can be constantly triggered, this online slot can easily make players richer. 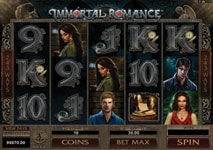 Microgaming’s team of developers have fixed on the idea of mysterious and forbidden romantic feeling between vampires, a witch and a woman which is nowhere near a mere mortal person. Players are guaranteed to be very intrigued by the plot of the game which evolves before their eyes with every spin.

You can read the stories of each of the characters and learn a little about their feelings and desires. As players hit some interesting combinations of symbols they can see interactions between the different characters who are all somehow connected with each other. The background of the game is dark and there only two beams of light at both top corners which reveal two statues – one of an angel and one of a demon. This is a recurring theme in this game that somehow intertwines the paths of good and evil.

The sound effects and music used for the game are so captivating that players will immerse themselves completely in the secret, dark and romantic relationships between the four main characters.

The high-value symbols of this online slot are represented by the main protagonists of Immortal Romance. Amber who is a witch with supernatural powers, the dangerous, yet very attractive vampire Troy, his best friend, who is also a vampire, Michael and Sarah who has become Michael’s love interest are four of the higher value symbols. There are two areas connected to the story of the game. Those locales also represent high-paying icons. The playing cards from 9 to A can also be seen in Immortal Romance as the low-value symbols.

The Wild of this exciting online slot is with the logo of Immortal Romance and it can replace any other symbol, with the exception of the Scatter. The Wild can also double the win when it is a part of a winning combination. 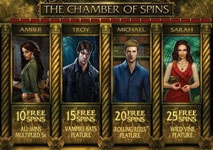 The different features that can be activated in Immortal Romance make the game very exciting and with a great potential for rewarding spinning rounds. While playing the slot the Wild Desire feature can be triggered randomly. When it is active it can turn up to 5 reels Wild. The only downside of Wild Desire feature is that while it is active there is no possibility of triggering Free Spins.

When you land three, four or five Scatters, you will unlock the Chamber of Spins feature. This will give you a chance to hit some pretty impressive wins. You can activate this option multiple times and the more round you play at the Chamber of Spins, the more bonus features will be unlocked.

The first four times when this feature is triggered, you will have the chance to play with the Amber bonus which rewards players with 10 Free Spins and a multiplier of 5x for all wins. There is also the chance of re-triggering the Free Spins.

From the fifth trigger of the Chamber of Spins feature, players will be able to play with the Troy bonus which grants 15 Free Spins and a Vampire Bats feature which can randomly transform symbols into 2x and 3x multipliers. There is a chance of winning up to 6x multiplier during the bonus round.

As mentioned earlier, players can enter the Chamber of Spins multiple times. After the tenth trigger of the feature, you will be able to play with the Michael bonus which awards 20 Free Spins and consecutive wins can actually increase the multiplier up to 5x. During this bonus round, there is a chance of hitting multiple consecutive wins.

Last but certainly not least, is the Sarah bonus which can be reached after the fifteenth trigger of the Chamber of Spins feature. It can make the game extremely fruitful and fun by providing 25 Free Spins. There is an exceptional Wild Vine symbol that can appear on reel 3 and it has the ability to transform symbols into Wilds. While playing this bonus rounds, two, three, four or five Scatters will re-trigger one, two, three or four additional Free Spins.

Immortal Romance can definitely keep players entertained for a long time. Not only is the storyline of the game extremely intriguing but the various bonuses add to the high payouts of the game. This online slot can definitely award players with an entertaining and lucrative online betting experience.