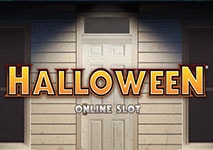 Halloween is a recently released slot game, developed by Microgaming. It is based on a 70s movie of the same name and it features much of what made that film memorable. The game comes with 5 reels and 50 individual paylines. Betting options are quite diverse. Players cannot adjust the number of paylines, always betting one coin on each of the 50 lines, but they can increase or decrease the value of the coins.

Each coin can have an assigned value between $0.01 and $0.50. Moreover, players can wager up to 8 coins per payline, which will further increase the bet. Logically, we come to the conclusion that the minimum wager in Halloween is $0.50 per spin, while the maximum can go as high as $200 for those who love to take large risks. 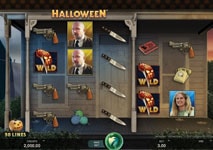 The Halloween slot game is based on the 1978 horror movie of the same name. The game seeks to replicate the movie’s atmosphere and dreary feeling and it tries to do so by implementing many of the original film’s characters and objects that were seen in the story. As such, we are treated to a mostly true representation of the original material.

Fans of the movie will certainly appreciate the attention to detail exercised by the developer and may even experience nostalgia trips when watching the reels spin. Visually, the game is what we would expect from a 2017 slot, featuring clear cut graphics and smooth animations. The background track is excellently composed and it serves to fully immerse players in the haughty atmosphere.

The symbols in Halloween portray iconic objects from the film, as well as some of its more important characters. Halloween does not stray too much from the set norms and therefore, its symbols can be classified into three separate categories. Under the Low Paying category, we find various items seen in the movie, such as a telephone, a clown’s mask, a knife, and a handgun. These symbols are static and do not play any special role in the overall gameplay. The High Paying category consists of four of the main characters in the film – Lynda, Annie, Loomis and Laurie.

After that, there is the Special category to account for, where we find the Wild and the Scatter. The Wild symbol is a hand holding a knife and it will substitute for any other symbol on the reels bar the Scatter. Unfortunately, the Wild does not feature its own paytable, which is disappointing. The Scatter symbol, on the other hand, will be the key to unlocking the game’s special features when you spin 3 or more Scatters at once. 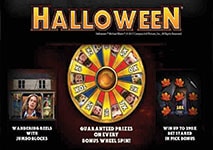 Unlike some of Microgaming’s other popular titles, Halloween does not have a progressive jackpot, but it does have some killer features which you will definitely be interested in.

The Trick or Treat Wheel bonus round will begin when you spin 3 or more Scatters at the same time. This feature will have you spinning a wheel and earning rewards while doing so. The Trick or Treat Wheel features cash prizes with a bet multiplier of up to 10x, free spins, or the Boogeyman Bonus. According to the rules, you will get to spin the wheel, earning cash prizes, until the wheel stops on the Boogeyman Bonus or free spins.