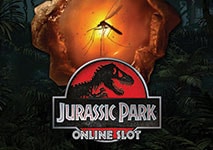 “Life, uh… finds a way.” And so, the Jurassic Park franchise has found its way to the video slot industry. Released in mid 2017, this adaptation really does the source material justice. It is filled with many great and unique features and it gives you the chance to win up to 475,000 coins.

This new video slot by Microgaming has multiple bonuses and is of the 243 Ways-to-Win type. It has an RTP of 96.67% which is well above the average. The minimum bet is $0.30 and the highest is $75, but keep in mind that these can vary in different casinos as the software is configurable. 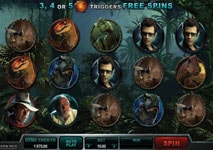 As is self-evident by the title, the theme of this wonderful slot game is the movie Jurassic Park. The background is a perfect loop of a dark jungle scenery and the game also offers its authentic sounds. It is a great update from the usual movie-adaptation slots in which one or two of the songs on the movie’s soundtrack are playing over and over again. There is still background music, but it is in no way annoying as it is only an instrumental.

The animation is top-notch, with great pop-up effects and it is also accompanied by the appropriate sounds – the dinosaurs growl and hiss, when you win you get the theme song of the franchise and so on. It is an all-around great looking and sounding game.

Another splendid feature is the footage from the movies that has been added. When you get a winning combination with one of the characters’ symbols you get multiple scenes with them playing in the small squares. The only unfortunate part of this is that there is no sound when the scenes are playing. However, there is a movie footage with the sound on when some of the bonus features are activated.

The low-value symbols bear the images of 5 dinosaurs – Dilophosaurus, Triceratops, Brachiosaurus, Velociraptor and, of course, Tyrannosaurus Rex. Their value goes from the lowest to the highest in the aforementioned order, meaning that the symbol with the highest value is the T-Rex and the amount of coins you win with 5 such symbols is 5 times your bet.

The high-value symbols are those with the main characters, starting with Ian, John, Ellie and naturally finishing with Alan. His is the highest-value symbol, with a maximum win that can be up to 1,000 coins depending on your bet. As we already said, a character symbol win grants you a look at more than one of their scenes.

The wild symbol is the movie’s logo, which is also the official park’s logo. It can take up the space for only one symbol but it can also be stacked. It substitutes for all symbols except for the scatter one.

The scatter symbol is of the mosquito preserved in the amber which contained the blood of a dinosaur in the movie and that is what makes the recreation of dinosaurs possible. If you get two of them, you win your bet and with 3 or more, the win is increased and the bonus game is triggered. 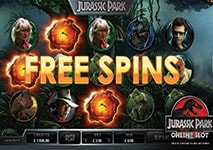 The first bonus feature we want to mention is the Random T-Rex Alert Mode. A T-Rex appears in the background and walks around or even pokes at the base screen. Once this mode is activated, you get 35 additional wild symbols for the next 6 paid-for spins.

But let us get to the actual Bonus Game here, or shall we say games? That is right, there are five bonus games featured in this slot. You get to pick one after you have hit 3 scatters 25 times, which is a tad unrealistic but still a nice addition for anyone who is willing to play for that long.

The first one is the Dilophosaurus Free Spins with Winning Wilds feature. This grants you 12 free spins with a Dilophosaurus running around and spitting wilds on the reels. You also get its symbol stacked during the free spins, which cannot be re-triggered in this feature.

The second one is the Brachiosaurus Free Spins with a Mystery Multiplier feature. This is the only bonus feature which allows you to win additional free spins. Multipliers boost the wins 2 to 6 times and you get a Brachiosaurus moving around, occasionally taking a few bites out of the top of the background. Its symbols are also stacked.

Next up is the Triceratops Free Spins with Running Wilds feature. The difference here is that each round has more wilds and if they are not stacked together, the symbols shift so that they become stacked. There are also stacked Triceratops symbols.

The fourth one is the Velociraptor Free Spins with Split Wilds and Multiplier Wilds feature. The way wilds split gives you a chance of winning a 6 of a kind combination which pays double for 5 of a kind. The multiplier wilds can be up to x6 and, as with the rest, you get the corresponding dinosaur symbol stacked. Of course, there are Velociraptors going around.

And lastly we have the Tyrannosaurus Rex Free Spins with Wild Reels. The T-Rex appears in the background and can turn all 5 reels into stacked wilds. This is how you get the biggest win possible in the game.

Overall, this is a great new slot by Microgaming and it is obvious that they have spared no expense.