The Phantom of the Opera Slot 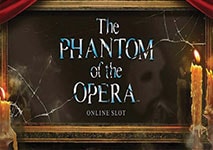 There is no doubt that The Phantom of the Opera is a true masterpiece and there is a reason for its humongous popularity. The 2004 movie of the same name was also a huge success and it has inspired the gaming developers of Microgaming to create the online slot that follows the story of the musical.

The Phantom of the Opera has five reels and 243 ways of rewarding players. It is definitely a very exciting online slot with original music, a classy design and plenty of bonuses that can make any players adventure fruitful and fun. 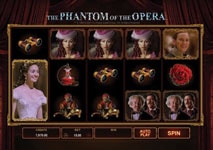 The theme of this online slot is inspired by the movie musical The Phantom of the Opera, starring Gerard Butler as the main protagonist. The character of The Phantom is both scary and mysterious and due to his unrequited love, he becomes obsessed with the beautiful Christine Daaé. The game uses characters and items which are iconic for the 2004 movie.

The graphics are amazing and they can make any player enjoy his time while spinning the reels of Phantom of the Opera. To make the experience even more thrilling and enticing, the developers of Microgaming have decided to use some of the original songs from the movie. The slot is positioned in front of heavy red velvet curtains which are ready to reveal the next opera performance. The symbols which use the images of the movie characters are decorated with golden embellishments which remind of the classy and intriguing ornaments you can see in many opera houses. The wonderful graphics, combined with the immersive sound effects, make this online slot a wonderful source of entertainment for the fans of the musical.

The symbols that you will encounter while playing The Phantom of the Opera are all connected to the musical and the characters within it. The Phantom is the symbol with the highest paying and Christine Daaé, Raoul, Carlotta, Gilles André and Richard Firmin represent the high-value symbols of the game. For the low-value icons, players will see other items related to the musical. Those include a red rose, a music box in the shape of a monkey, a letter, a bottle of perfume and a binocular.

There is also a Wild symbol with the logo of The Phantom of the Opera. While playing the base game Wilds can be double stacked. The Wild can replace any symbol on the reel, except the Scatter and the Letter symbol.

The Scatter is represented by the mask of The Phantom and it can appear only in the main game and improve the payout chances of players. There is also a Letter symbol that can land only on the fifth reel. It unlocks random prizes that can make every spin more lucrative. 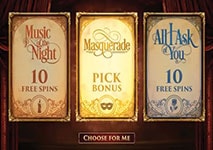 For those who are intrigued by the visual appeal of the game, there are even more surprises when they land certain winning combinations. As you play the base game, a random Chandelier may drop on the reels which will activate the Chandelier Bonus. It can turn up to 3 reels Wild which can ultimately increase the chance of landing a winning combination.

The aforementioned Letter symbols may appear on the fifth reel. This will unlock different cash prizes of up to 20x the total bet. This bonus can definitely make any spin more lucrative. The Scatter wins can also be multiplied and increase the size of the payout. Three or more Scatters anywhere on the reels will trigger the Bonus Selection. Players can choose from the Masquerade Bonus, Music of the Night Free Spins or All I Ask of You Free Spins.

The Music of the Night Free Spins bonus will award players with 10 Free Spins. While those Free Spins rounds are being played, several random features might be activated. This Bonus may award players with a multiplier up to 4x, up to 3 Wild reels or up to 5 Wilds randomly placed anywhere on the reels. There is also a chance of receiving up to 5 additional Free Spins. Multiple features can be activated during the same spin. The Bonus game plays with the same bet size that triggered the feature.

When the Masquerade Bonus is active, players have 3 levels where they can pick the prizes they can benefit from. Cash prizes, additional picks and a higher level are among the perks you can win in the Masquerade Bonus round. When players enter this Bonus round, they will receive 3 picks. Upon reaching level 2, they are awarded 2 picks, when the fans of this online slot reach level 3, they will receive 1 pick.

If you choose the All I Ask of You Free Spins bonus, you will receive 10 Free Spins. In this bonus round, there are Dancing Raoul and Christine Wilds which can transform the symbols on the reel into Wilds. This will improve the chances of hitting winning combinations. When the Dancing Wilds land in the same position, they award a 3x multiplier. If they are next to each other horizontally, both of their reels will turn Wild. If the Dancing Wilds stop at the same reel, it becomes Wild. Finally, if the two Dancing Wild symbols land diagonally adjacent, this will create a 2×2 Wild block.

The Phantom of the Opera is definitely a gem in Microgaming’s online slot collection. With a great theme, fun design and a lot of different Bonus features, players can have fun and win some serious money at the same time.