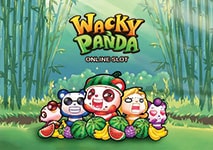 When it comes to online slots, numerous paylines and reels are not always the norm. Sometimes the true charm of games is hiding in their simplicity. This is the case with Microgaming’s Wacky Panda which is a 3-reel online slot with a single payline. It cannot go any more basic than this. Although most virtual players are used to more complex games with at least 5 reels, Scatters, Wilds and Bonus features, there are still players who are fans of classic casino entertainment. This is why Microgaming has decided to create Wacky Panda.

The graphics of the game are wonderful and the adorable panda can be seen in almost every position on the reels. The design of this game has made it a fun way to spin and still win some money. Adjusting the bet size is very easy thanks to the menu below the reels. There is also a paytable on the right side of the playscreen where players can see the number of credits they will receive for every combination of symbols of Wacky Panda. 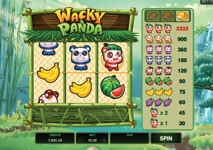 Many people consider the panda as a lucky animal. This is why it is no surprise that this adorable animal is often used as a mascot for many casino games. This is why Microgaming has also decided to use the panda as the main character of this classic online slot.

The name of the game is very appropriate as the panda can be seen in different forms across the reels. There are also plenty of illustrations of what looks like the natural environment where you can usually spot this adorable animal.

The reels of the game are ‘constructed’ by bamboo sticks which are the panda’s favourite snack. The logo of Wacky Panda stays on top of the reels where you can land on different pandas and fruits that can also feed the friendly fellow.

The background of the game can carry players away, in the forest where the cute pandas are hiding. You can see beams of light sneaking between bamboo trees on the left side of the playscreen. There is also a sparkling waterfall that streams down into a water pool and this whole picture shows the tranquillity and beauty of nature.

There is no doubt that the gaming developers of Microgaming know how to provide games with impeccable quality and Wacky Panda definitely can prove this with its amazing graphics. The immersive sound effects of this online slot make the spinning experience of every player even more real. If you close your eyes you can easily imagine the waterfall and the sound of nature that surrounds the cute pandas of the game.

If you are a fan of classic casino games, then Wacky Panda will suit your taste. Although there are no Wild or Scatter symbols in this game, there are plenty of pandas that can award players with quite generous payouts.

As the title of this online slot suggests, there are pandas everywhere on the reels. The symbol which brings the best payout is an adorable red panda bear that wears a watermelon as a hat. Even a single red panda can bring players a win of 30 credits. The next symbol that can be seen on the paytable section is a yellow panda which looks quite upset due to the fact that it has slipped on a banana peel. The next symbol in the game is quite an adorable purple panda. It has heart-eyes and a single grape on its head. Next on the list with cute pandas is the blue one. It looks a little different from its fellows as it has a large smile and with its dark sunglasses it has a rather cool pose. Last but not least from the animal group of symbols, we have the black panda which is facing the screen with its back but its head is turned towards the players. This adorable bear has stuck its tongue out and is looking in a rather mischievous way.

The rest of the symbols which form the lower-paying combinations use fruits as their icons. The first fruit you will see on the paytable is a watermelon which was on the head of the red panda. The next fruit was also seen with the panda symbols and it is a banana. The last symbol which brings the lowest payout is a bunch of grapes. 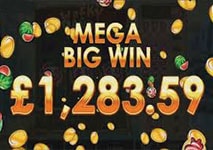 There is nothing complicated about Wacky Panda. From the on-screen paytable players can choose the number of coins they can bet. They can opt for single-coin, two-coin or three-coin bets. In this simple online slot it is all about the red panda. Even a single red panda on the payline can bring 30 credits if players place a three-coin bet.

Two red pandas in any position on the payline will award players with 45 credits, while the most high-paying combination is three red pandas that can bring the generous win of 3,333 credits. The rest of the symbols award a win only in combinations of three. Although it has a pretty simple look, Wacky Panda can still bring great wins and a ton of fun to online players.