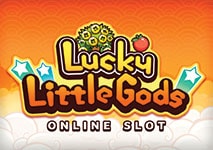 Microgaming has created an online slot which will appeal to players who are fascinated with cartoons in the manga style. Lucky Little Gods reveals a game that uses several adorable characters that represent Chinese gods of luck and wealth. This slot has 5 reels and it offers 243 way to win which means that players can enjoy extremely fun and lucrative game.

This online slot can run smoothly on any device and thanks to its Wilds and Scatters, chances of hitting high-paying combinations are very high. There are Bonus features that can make every spin more entertaining and fruitful at the same time. As a leader in the iGaming industry, Microgaming has definitely made sure that Lucky Little Gods can provide players with the best spinning action. 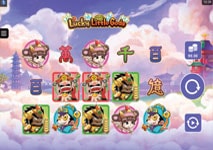 The inspiration behind the adorable and fun look of this game are several Chinese gods of fortune and their apprentices. The cartoon design of the game, make it resemble the style of comics and mangas that have numerous fans around the world. The characters and icons used in the game, are floating up in the skies, surrounded by ancient Chinese temples, magical trees and cotton-candy-like clouds.

The Gods are all dressed in colourful and richly ornamented clothes – an attire that can suit only true fortune deities. The design of the game shows the amazing results of the hard work of its creator. Thanks to the animation style and the fun sound effects, players can test their luck while completely immersing themselves in the world of Chinese Fortune Gods. Do yourself a favour and try your luck on this amazing online slot. Let the characters of Lucky Little Gods decide your destiny and award you with amazing Bonus rounds.

The aforementioned theme of this game makes the choice of symbols pretty obvious. To suit the fun cartoony style of the online slot, the creator of Lucky Little Gods have chosen several adorable characters to play the role of high-paying symbols. Among the high-value icons, players will see a couple of Fortune Gods and their cute apprentices.

Most online players are used to seeing the playing cards as symbols for the low-value symbols. Lucky Little Gods, however, is definitely not a game that resembles any other. This is why even the icons chosen for the lower-paying symbols go along with the general theme of the online slot. The low-value combinations are represented by Chinese symbols.

In order to stay true to the fun and specific look of the game, the special symbols are also with adorable characters that resemble symbols that are associated with bringing people fortune and wealth.

There is a Scatter symbol with an animated Golden Tree which can make the outcome of the spins very rewarding. It can land on reels 1 and 5. There is also a Treasure Pot Scatter that can land in any position on reel 3. In addition to these two Scatter symbols, Lucky Little Gods also has a Free Spins Scatter with two cartoon dynamites which can appear anywhere on the reels and award Free Spins.

There is also a Wild with the logo of the game. It can replace any symbols on the reels, with the exception of the Scatters. This way the chance of landing a winning combination increases. 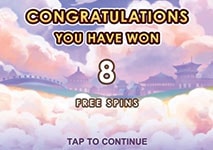 Another Scatter Bonus is triggered when the Treasure Pot Scatter lands on reel 3. It can bring a bountiful coin prize and while it appears only during the base game, it has the potential to reward up to 100x the total bet on a single spin.

If three, four or five Free Spins Scatters appear anywhere on the reels, this will unlock 8 Free Spins. Each Scatter awards one additional spin and Scatter wins are multiplied by the total bet that has been staked. During the Free Spins, reels 1 and 5 are fully Wild.

To show players that there is always a way to win with this online slot, players can unlock the Little Gods Bonus on non-winning spins. This feature can be triggered only during the main game and players can win 4x to 40x the total bet on a single spin.

With this online slot, Microgaming has proved yet again that online gamblers can have a fun time and still win some pretty impressive payouts. Lucky Little Gods is an entertaining slot with adorable look which should not deceive players since the various Bonus features of the game can make the outcome of every spin very lucrative. Do not hesitate to let your future fortune in the hands of the Chinese Fortune Gods of this fun virtual slot.