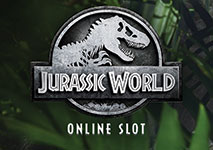 Jurassic World is a highly popular slot game, developed by Microgaming, one of the largest software development studios in the online casino industry. This game was released back in mid-2017 and it has been going strong ever since.

Jurassic World features 5 reels and a 243-way-to-win system in place of traditional paylines. The betting limits are not as liberal as those of other slot games, but they will certainly meet the expectations of most players. The minimum wager in the game is $0.30 and that can go as high as $36.00 per spin. Jurassic World pays left to right, which means that each winning combination has to start on the leftmost reel and continue on the adjacent reel. Moreover, the game features a return-to-player ratio of 97%, making this one of the most favorable slots to play in terms of odds. 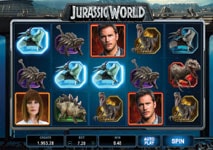 The theme in Jurassic World is quite obvious, after all, there is not a single person who has not heard of this all-time classic film. In the Jurassic World slot, we get to see various characters and dinosaurs each time that we spin the reels. The graphics of this game are designed as close to the film as possible and fans of the cinema version may even experience nostalgia trips when playing it.

The animations are a joy to behold, with the reels coming alive on the screen every time you press the Spin button. Moreover, the background music further serves to immerse you in the Jurassic atmosphere. Overall, Microgaming has put in a lot of effort when making this game and we are happy to see this company still standing strong and releasing quality products.

When you first start Jurassic World, you will immediately notice the various symbols that pop up on the reels. These can be separated into three distinct categories, based on their pay tables and what special function they serve in the game. The Low Paying group is made up of various dinosaur creatures that we see in the movies. This group has the lowest payouts out of all the symbols. The High Paying category features exclusively human characters from the movie and it offers much better rewards than the previous group.

Finally, we come to the Special category, where we find the Wild and the Scatter. The Wild is pictured as the franchise’s logo and it will replace for any other symbol in the game, except the Scatter. The Wild can also stack up to 10 high and also features its own paytable, rewarding 300 coins to those who manage to line up 5 Wilds. The Scatter symbol, on the other hand, is a bug frozen in amber. When you spin 2 Scatters at once, those two symbols will turn into Wild symbols, whereas hitting 3 or more will reward you with free spins. The Scatter is also the highest paying symbol in the game, rewarding 3,600 coins to players who spin 5 or more Scatters at once. 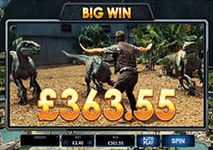 Jurassic World does not have any progressive jackpots, but the features found in the game are more than worthwhile. There are three different kinds of free spins that you can unlock.

The Creation Lab features Rolling Reels and Cryo Wilds. Rolling Reels replace winning symbols to make way for new ones and this way Rolling Reels can award multiple consecutive wins. The Cryo Wilds will remain in place for 3 wins.

The Raptor Den is the third free spins feature and it offers Wild Scatters. During this feature, all Scatters turn into Wild symbols and Scatters are held until they reward additional free spins. Players can unlock 5 free spins for every 3 or more Scatters that they spin.

The Indominus Feature can randomly trigger during the main game. When this happens, the Indominus Rex can appear and boost your winnings up to 1,000x the triggering bet.