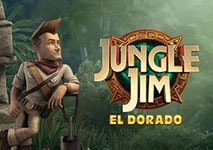 Jungle Jim is an advanced adventure-themed slot that is available across many online casinos running on Microgaming’s platform. The game can be played across desktop and mobile devices and features the standard setting of 5 reels and 3 rows. It awards payouts across 25 fixed paylines and should not be mistaken with Microgaming’s previous release of the same name which plays over 15 adjustable winning lines.

Released in the summer of 2016, the newer version of Jungle Jim is a major far cry in comparison to the original variation, especially when it comes to design. The slot is an immediate attention grabber as it boasts great animations, crisp visuals, amazing sound effects, and a fuss-free gameplay. The developers have incorporated plenty of original features such as rolling reels, dynamic multipliers, scatters, wilds, and free spins. You can play for as little as $0.25 for the chance to win a fixed jackpot of up to 920,000 coins. 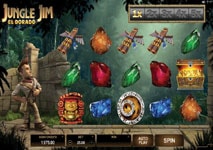 With Jungle Jim, reel spinners embark on a thrilling but dangerous adventure that takes place deep into the heart of the thick jungle where the main character is searching for the famed city of gold, El Dorado. The slot is rather innovative in terms of design and resembles an animated movie. The reels are transparent and spin on top of a thematic backdrop which shows you the impenetrable jungles of South America. The backdrop is animated and one is even able to see drops of rain falling from the skies.

The main character, adventurer Jim, stands to the left of the reels and every once in a while would scratch his head, smash an annoying fly, or rest his elbow on his shovel’s handle grip. All high symbols in the game relate to its treasure-hunting theme so you can form winning combinations by aligning chests of gold, statues, native flutes, and scepters on the five transparent reels. The low-value symbols contain gemstones of different colors.

The sound effects are also masterfully rendered and complement the game perfectly. As you spin the reels, you get to hear the chirping of birds and the croaking of frogs in the rainforest. Winning combinations are made to stand out with a distinct sound effect.

Microgaming developers have spared no efforts to create a visually pleasing slot. All symbols are beautifully rendered and well animated whenever they partake in winning combinations. The top payers in the game are all thematic and include a treasure chest, a native statue, a scepter with an emerald snake, and a flute. The treasure chest is the most lucrative of those since it awards 3,000 coins per coin staked, which means you can collect as many as 30,000 coins if you are playing the maximum level.

The low-value symbols are also quite interesting in terms of design and contain precious stones of different colors – blue, green, red, and orange. These can earn you between 3 and 100 times the line bet but the precise amount depends on the number of coins you bet per line and their denomination.

There are two special symbols in the game, the first one being the wild with the Jungle Jim logo, whose sole function is to replace other icons thus assisting you in creating more winning combinations. The wild does not return any payouts. The second symbol of special interest is the scatter which contains something that resembles an ancient artifact and activates the round of free spins. Unlike the wild, the scatter returns a regular payout of 125 coins for three matching symbols. 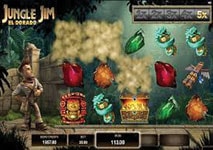 The Microgaming software developers have incorporated two very distinctive features into Jungle Jim. When you hit the spin button, you will notice the reels do not rotate as is usually the case with most slots. Instead, the symbols fall onto the reels from above, which is known as the “rolling reels” feature.

Some may argue that the difference here is purely stylistic but this is hardly the case. Whenever several symbols align on a payline to complete a winning combo, they would vanish into thin air to make room for more icons. The new symbols would then fall into place from above, potentially forming more paying combinations, which may also cause several wins in a row.

This leads us to Jungle Jim’s second distinct feature, the Multiplier Trail. When the game loads, you will immediately notice there is a multiplier meter, located in the upper right corner of the main screen. It contains multipliers 1x through 5x.

Each subsequent winning combination would cause the multiplier to increase by one unit until you eventually reach the maximum of 5x for five wins in a row. Reaching the top multiplier is a mean feat though and happens rarely, at least in our experience, as we repeatedly succeeded in scoring only three wins in a row for a 3x multiplier.

Players who decide to try Jungle Jim will also benefit from a round of 10 free spins. These are unlocked whenever you land three or more scattered symbols on the same spin but there is also the possibility of retriggering this bonus feature with the same combination. The good news is there is a Multiplier Trail for the duration of the free spins but the multipliers’ values are tripled, which is to say your wins are boosted between 3x and 15x.

Reels spinners who are into adventure-themed slots with expert animations and lots of cool features most definitely should give Microgaming’s Jungle Jim a try. The game offers a rather satisfactory average return of up to 97% and is playable on all devices, meaning that you can end up locking the 920,000-coin jackpot on the go.