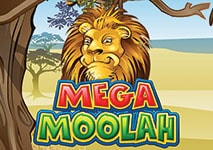 There is hardly an ordinary person on this planet who has not dreamed of becoming a millionaire at one point or another. In fact, this is the mindset of many reel spinners out there, especially those who play Mega Moolah. The game is developed by software supplier Microgaming and is easily one of the most popular titles in the whole realm of online gambling. It provides players with an opportunity they do not want to miss, namely locking up an enormous progressive jackpot.

Mega Moolah is an Africa-themed slot which allows you to score winning combinations on 5 reels, 3 rows and a total of 25 adjustable paylines. The game was released back in December 2006 across Microgaming-powered online casinos. More than ten years later, the game’s popularity has not waned and it continues to be one of the most played online slots to this date. Mega Moolah contains not one but four progressive jackpots along with a healthy range of special symbols and extra features to make one’s spinning session even more lucrative. 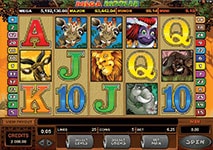 The theme of Mega Moolah revolves around a fun safari adventure in the sizzling hot savannah of Africa. As you spin the five reels, you will be joined by a whole crowd of lovable beasts that are peculiar to the Dark Continent. The Microgaming software specialists have rightfully opted to use animal symbols for the high-paying winning combinations.

Players can win big by aligning identical symbols containing elephants, monkeys, giraffes, African buffaloes, zebras, and roan antelopes. Of course, no Africa-themed slot is complete without the King of All Beasts, so it is only fitting the developers have chosen the lion for the highest-paying combination in the game.

The prizes that are smaller in size are awarded, as usual, for matching symbols containing high-playing cards 10, J, Q, K, and A. These are all colored in different hues which makes it easier to distinguish them from one another.

It is the orange, earthy brown, and yellowish hues that dominate the design of the slot. The reels themselves are set against a leafy backdrop featuring the African savannah. The design of the symbols seems a bit outdated and cartoonish but this is not that big of a disadvantage, especially for a game with such an immense jackpot. Moreover, animations are included in the game and when one locks a winning combination, the African beasts come to life on the reels – the lion roars, the buffalo starts shaking his head and so on.

The high-value symbols you can win with in Mega Moolah all feature amiable African beasts as becomes a safari-themed slot. The highest payers in ascending order are the slender gnu, the striped zebra, the lolling giraffe, the meek buffalo, the wise elephant, and of course, the mighty lion. The top payer is naturally the King of the Beast, with five lion symbols on a payline resulting in a win of 15,000 credits. The other animal symbols can earn you between 10 and 750 credits, depending on the beast and the number of its matches.

What is interesting about the buffalo, the elephant and the lion is that these three symbols return payouts for two matches only, which makes them especially profitable for players. In comparison, the zebra, the gnu, and the giraffe pay out whenever at least three of their symbols align on a payline. You win smaller prizes by hitting matching low-value symbols containing the playing cards – there are five of those (10, J, Q, K, and A) and these form winning combinations rather frequently which means you can rely on a steady flow of coins into your balance. These card symbols can earn you anywhere between 2 and 150 credits, which is not too shabby for low payers.

There are two special symbols spinners need to be watchful for, the first one being the lion which is wild (excuse the pun) and as such, it can replace the other icons, assisting players on their way toward locking more wins. Not only does the wild lion substitute but it doubles all wins it helps form with a multiplier which further increases its value.

The only symbol the King of the Beasts cannot substitute for is the scattered monkey. This scatter returns a payout of 100 coins for five matches. More importantly, it triggers a round of free spins whenever it lands on reels 3, 4 and 5 at the same time. 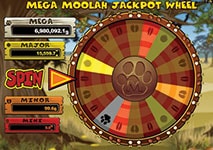 Mega Moolah provides players with the chance to collect extra payouts in a risk-free manner. The game offers a round of 15 free spins which is unlocked by three scattered monkeys landing on the third, fourth and fifth reels concurrently. There is the extra benefit of having your wins tripled during free spins. You can also unlock more free spins by landing the same triggering combination during the feature.

But it is probably the progressive jackpot you want to know about. Mega Moolah offers a four-tier progressive pot which, figuratively-speaking, increases at the speed of light since the game is linked to the Microgaming jackpot network spanning all casinos utilizing the developer’s software. Each time someone around the world makes a real-money bet on this slot and hits the spin button, the pot would grow in size, reaching mind-blowing amounts. That being said, when the prize is won, the jackpot is reset but starts seeding from £1 million.

So, the game offers four different pots, the Mega, Major, Minor, and Mini prizes. The jackpots are triggered at random during the base game but the higher the amount you bet, the greater your chances of getting to the jackpot wheel game. The wheel is divided into sectors of different colors, each one corresponding to one of the four pots. The number of red sectors corresponding to the Mini prize is the highest whereas there is only one white sector reserved for the Mega jackpot. The bottom line is you are guaranteed to win one of the four when you trigger the wheel game.

Mega Moolah is one of those games any slot fan must try at least once in their lifetime. It never gets old no matter how outdated its graphic design appears to be when compared to those of newer Microgaming releases. The jackpot is won once every couple of months on average, so do not hesitate to give the “Millionaire Maker” a spin or two next time you visit your favorite Microgaming casino.