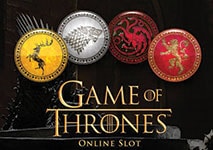 If you are a real casino fan, you have probably noticed that recently software providers strive to offer something new and different that will appeal to as many people as possible. That is why they try to keep up with all the latest trends in movies, songs and so on. In this relation, we can provide Game of Thrones as an example.

It operates on Microgaming’s platform which guarantees players a top-notch experience. The game plays out on 5 reels, 3 rows, and there are 243 ways to win. In addition to this, it offers several features that can help you increase your winnings. 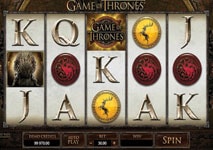 The game is inspired by one of the most popular fantasy series of all times. Even if you have not watched it, you have at least heard about it or about the hype around it. Still, if you are not familiar with the Game of Thrones series, it is a fantasy epic that is based on George R. R. Martin’s books and tells the stories of several powerful families. The action takes place in Westeros and Essos, the fictional continents in the story. If you have seen the series, you will definitely notice that there are numerous references to it in the game. Yet, do not worry if you have not seen it because you can still enjoy all the game’s big prizes and additional features.

As it was already mentioned, the game is developed by Microgaming. In other words, casino operators can configure the software which means that the minimum/maximum bet that can be placed may vary in different Microgaming casinos. Game of Thrones also gives players the opportunity to choose between demo credits and demo coins.

The alluring and intriguing gameplay is further complemented by the game’s symbols such as the Iron Throne of Westeros. Still, some players may be quite disappointed to find out that the symbols feature only signs from the main houses – Stark, Targaryen, Lannister, and Baratheon. The game’s graphics further add to the mysterious feeling and the darkness of the impending events. In addition to this, the fans of the series will instantly recognize the music they hear throughout their gameplay.

What is more, players are given the opportunity to adjust their bets as there is a button “Coin Size” that allows them to modify the coin denomination. Additionally, there is a button “Autoplay” that enables them to enjoy the game a preset number of times without interruption.

As it was already mentioned, the game is done in the style of the famous TV series and it features several symbols depicting Westeros Houses. Some of the symbols players can come across during their play are represented by the sigils of the main houses. 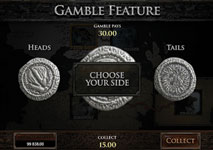 Bonus features are really important and quite often they are the reason why players prefer online slots. Fortunately, Game of Thrones offers some really attractive features.

When you get two scatter symbols in any position on the reels, you are awarded a cash prize. When three or more such symbols appear anywhere on the reels this will trigger the free-spins feature which will definitely capture players’ attention. Then, you are given the chance to pick one of the four free-spins features each of which gives you a certain number of stacked symbols and free spins. In this round, players can choose between the houses of Baratheon, Lannister, Stark, and Targaryen.

The other feature players can take advantage of is the Gamble Trail Feature which is quite imaginative. It is a “heads or tails game” that gives you the opportunity to start your journey throughout four map locations. Each time you guess the side of the coin, the journey will continue and your winnings will be doubled. When you reach the gamble limit, the journey will end.