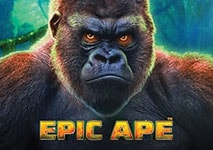 Epic Ape is a brand new video slot game, created by the industry leader Playtech. This company has long been in the business of creating online casino software and Epic Ape is one of their latest creations, being released in late 2017.

Epic Ape does away with the traditional payline system and instead, uses the 4096-ways-to-win setup, allowing players to form many more winning combinations. The betting options in the game are also quite liberal, with the minimum bet starting from $0.40 and going up as high as $200. A set number of 40 coins is wagered each round, whose value ranges between $0.01 and $5.00. Clearly, Epic Ape is equipped to handle casual players, high rollers, and anyone else in between. 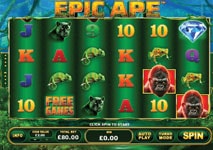 As soon as you start the game, you will immediately notice the various shades of brown and green that light up on your screen. Epic Ape features a distinct jungle theme, portraying many prominent members of the animal kingdom residing in such environments. The background image of the game depicts a dense jungle, with many shades of green and brown. The reels and the symbols we find on them are also presented in a similar fashion.

The soundtrack that we hear when playing Epic Ape perfectly lends itself to the overall atmosphere of the game, making the experience highly immersive. In short, Playtech has spared no expense where the presentation of the game is concerned. The graphics are beautiful to look at and the animations are buttery smooth. Epic Ape truly looks like a modern game should and users will be very happy with what they have at their disposal.

Epic Ape comes with a variety of distinct and memorable symbols, which will appear on the reels every time you decide to spin them. These can be categorised into three groups, with the deciding factors being their payout ratios and the function that the symbols serve in the game. The Low Paying category includes high cards, that we often see in slot games. In this case, they range from Nine to Ace and can form winning combinations from three or more of the same kind.

Following that, we come to the High Paying group, where we see some animals known for living in the jungle. This includes various reptiles, pumas, tigers and the ape, for which this game is named. The Ape is the highest paying symbol out of all of them, rewarding 300 coins to those who manage to line up 6 of them on a single spin. Unlike the Low Paying category, the High Paying symbols can form winning combinations starting from two of the same type.

The Special category includes two separate symbols, each serving a completely different role than the rest. First, we have the Wild symbols, taking the form of a diamond. It will substitute for all other symbols in the game bar the Scatter. While it does not have its own paytable, it will multiply wins up to 5 times when present during free spins. This symbol will appear on all reels, except the first one.

The Scatter symbol is the key to unlocking a round of free spins and to do so, you will need to spin 3 or more Scatters at once. The number of free games will depend on the number of Scatters involved. 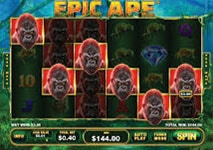 While Epic Ape does not feature any exceptional jackpots, it does include the free spins feature, which should prove more than adequate. Whereas most games include free spins as an afterthought, Epic Ape takes this concept to the next level, offering players one of the most compelling rounds of free games that you will find in any slot game. This feature is triggered whenever you spin 3 or more Scatter anywhere on the reels. Depending on the number of Scatters, you will receive up to 100 free spins. Spinning 3 Scatters will reward you with 8 free games, whereas 4 Scatters will earn you 15. Those who spin 5 Scatters will receive 25 free spins, while the lucky few who manage to get 6 Scatters, will be the recipients of 100 free games.