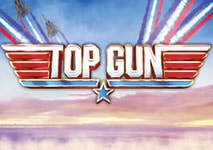 Top Gun is a top-of-the-line video slot game by Playtech, based on the 1986 American romantic military action drama film of the same name. The game was released in 2015 and it looks fairly good. It has an RTP of 94.9% and a pretty wide bet range – the minimum being $0.25 and the maximum $250. But more intriguingly, it is in a 243 Ways-to-Win format.

This is no guarantee for a win, though. Entering the bonus level is truly a challenge, one that takes a lot of time, effort and money but once you get to it, you will know that it has been worth it. 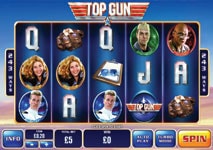 To put it simply – the movie is the theme. Everything from the starter screen, to the music is in tune with the movie. The whole main cast is included except for Maverick, which is a bit of a let down, but is okay in the long run.

With that said, all the other characters’ symbols have animations when you get a winning combination with them. Some of the images are directly taken from the movie, while the avatars are digital paintings. They are beautiful as is the rest of the art for the game.

The music is actually an adaptation of two songs from the original soundtrack of the movie – “Take My Breath Away” and “Danger Zone”. After playing for a while, the first one gets a little too much but hardcore fans will probably not mind. Still, it would have been nice to have a bit of variety.

The graphics are great. Once the Random Dogfight Wilds feature is activated, the music changes. Then a plane comes on screen and shoots at the reels, leaving wilds instead of bullet holes and the animation for it is pretty good.

When the Danger Zone feature is activated, the planes fly off the symbols and their animation is really good too. Then, a short part of the film plays on the base-game screen which is a nice touch.

There is also the Turbo feature, which makes the reels roll faster and the graphics hold up, the game does not freeze, which is commendable. Some games start lagging when this feature is on, so seeing it fully functional in a Playtech video slot game is nice.

J, Q, A and K are the low-value symbols here. The first pair gives you a maximum of 25 coins and the second pair – 50. Next up are Maverick’s jacket and a notepad with a pair of sunglasses on it, in which a plane is reflected. The best you can get with five of them is 100 coins.

Then, we get to the character symbols. First off, we have Jester and Stinger and with them, the maximum win is 150 coins. Then, Iceman and Goose can get you a win of 500 coins. And lastly – Charlie, 5 symbols with her guarantee you a win of 1,000 coins.

Then we have the wild symbol, which has the Top Gun logo on it, and five of them will give you a win of 1,500 coins. The scatter symbol is of a plane. 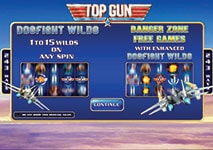 As was already mentioned, there are 243 possible winning combinations in this game and the best one is with 5 wild symbols. Now, that is no easy task but the Random Dogfight Wilds feature helps with that. Once it is activated, the plane will shoot from 1 to 15 wild symbols on the screen.

Earlier we mentioned the scatter symbol but we did not tell you what it does. Well, like most scatters, it triggers a bonus game called the Danger Zone. In the Danger Zone, the music changes and the same plane from the Random Dogfight Wilds feature comes up and starts shooting wilds faster and on more spots. This gives you the chance to get a Mega Win, which can be more than 100 times your stake.

However, all of these features are pretty hard to come by but once you do, we can guarantee you that a large amount of coins will be coming your way. The RTP of this game is lower than average and this might result in a slightly uneventful and less profitable gameplay so if you are a fan of the movie give it a spin, but keep in mind what your chances of winning are.