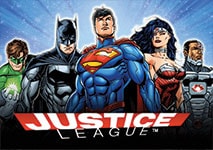 Playtech is famed for its DC-inspired slot series and has created many games which borrow their themes from the popular comic-book franchise. One of the latest additions to the constantly expanding collection of branded slots is Justice League, which was introduced to the world back in November 2017 in conjunction with the release of the eponymous blockbuster.

If you have seen the movie, you can probably guess what this innovative Playtech creation is all about. The slot borrows heavily from the popular movie and offers spinners enough action and excitement to keep them entertained for hours.

Overloaded with special thematic features, Justice League has 6 different Hero free games, re-spins, and the most important thing – a substantial progressive jackpot. The game is part of Playtech’s progressive network alongside some other DC-inspired slots, with a constantly increasing four-level jackpot. Players can win on a total of 40 paylines and 5 reels. 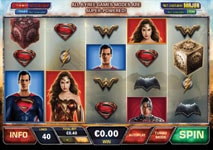 The very moment Justice League loads on the screen of your desktop computer or mobile device, you are introduced to the whole crowd of superheroes, including Wonder Woman, Superman, Batman, the Flash, Aquaman, and Cyborg. You can join the super-hero team on an exciting journey filled with amazing graphics, smooth animations, and epic sound effect but your experience will be improved even further by the footage from the original flick the developers have incorporated into this impressive slot. This way, the entire game appears even more realistic – it is almost as if one is watching the actual movie.

The backdrop behind the 5 reels is animated and so are the symbols whenever they form a winning combination. The high-value symbols all contain different superheroes from the DC Universe, but Batman is the highest regular payer in the game, rewarding players with 500 coins for five identical symbols. Playtech’s software experts have decided to spice things up a bit by substituting the standard card initials with thematic icons containing the symbols of four of the heroes. The wild is also designed in line with the game’s theme as it contains the Justice League logo.

As was explained already, the top payers in the game are the symbols containing the six superheroes. These can appear stacked to cover reels in their entirety which leads to more winning combinations.

Other than that, the game offers an average paytable, with the largest regular win of 500 coins awarded for five Batmans on a payline. Superman and Wonder Woman can earn you up to 400 and 300 coins, respectively. The other three heroes, Aquaman, Cyborg, and the Flash, offer the same payouts of 150/50/7 for five, four and three matches.

The prizes of smaller value range from 3 to 100 credits. Justice League also has a wild symbol which returns payouts of up to 750 coins and substitutes for all other symbols save for the scatter. You need three or more scattered symbols to get to the free spins in Justice League. 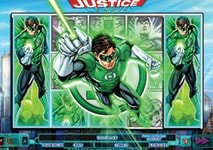 Justice League provides players with plenty of opportunities to win thanks to the great special features it is equipped with. There is a feature, called the Super Hero Respin, which can be triggered randomly on any given round. When this happens, one of the six superhero symbols is transformed into a wild for more winning combinations. It is possible to retrigger this feature up to five times until all heroes go wild.

Players have no reason to complain of lacking free spins, quite the contrary, they have 6 different modes of free games to choose from, each one inspired by a different superhero. You need to land three scatters to unlock the feature and afterward, you get to choose your favorite character to use their powers during free spins. The Flash offers the highest number of free spins, which is 15. You can trigger 3 more free spins for the duration of the feature by hitting two scatters at once. Re-triggering the free games feature is possible by landing 3 more scatters.

These are all very interesting functionalities but the biggest attraction here is without a shadow of a doubt the progressive jackpot. In fact, there are four different progressive pots you can win in Justice League – the Mini, Minor, Major, and Grand prizes. These can be won on any spin, irrespective of the bet size so that everyone is given a chance to scoop a prize. This is valid even for spins resulting in no wins whatsoever.

Justice League is a great game to play even if you are not a fan of the DC franchise. The game is extremely engaging and interactive as one gets to choose from different superhero modes during free spins, each one with its own peculiarities and features. But above all, Justice League can help you become a millionaire since its largest Grand jackpot usually exceeds the one million mark.