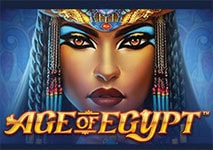 Launched in 2018, Age of Egypt is the latest addition to Playtech’s slot line-up and utilizes 5 reels, 3 rows, and 20 adjustable paylines. This exciting new slot stands out with sharp images, expertly crafted animations, and a beautiful design which highlights the Egyptian theme perfectly. Age of Egypt takes you to the land of the ancient Pharaohs where you can set out on an exciting journey in search for hidden treasures.

Nothing is omitted from this slot as far as features are concerned. There is the wild for substitution, a scatter, the Anubis bonus game with guaranteed payouts, and the Royal Treasury round of free spins. The developers cater to the needs of all reel spinners out there since the slot offers a broad range of betting options.

The game is suitable for both penny spinners and high rollers. You can set the reels in motion for as little as $0.20 if you activate all 20 winning lines or bet as much as $10,000 if you have the pluck and the bankroll. Yes, you read correctly, Age of Egypt allows you to stake $10,000 per spin, with coin values extending from $0.01 to $500.00. Those of you who prefer to play on the go can easily do so since Age of Egypt plays smoothly on desktop and mobile devices. 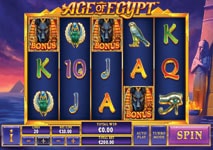 The spinning action is set in the land of Ancient Egypt but you probably have already guessed this by the name. Reel spinners are familiar with the Egyptian theme since a number of Egypt-inspired slots have been introduced over the course of the last few years. This begs the question “What makes Age of Egypt different from the rest?” The truth of the matter is the game is not that much different from other slots incorporating this theme but still deserves to be given a chance due to its sleek graphics and animations.

The reels rotate on top of a background depicting the mighty river Nile. You can see the imposing pyramids somewhere in the distance and a typical Egyptian statute to the right. The reels themselves are encased in gold, with the game’s logo displayed on top.

The symbols are also very well-designed and correspond to the game’s theme. Some of the images you will encounter on the reels are scarabs, the all-seeing eye, and a falcon statue, which represents Horus, the Egyptian god of kingship and the skies. The music playing in the background is not exactly Egyptian but if you find it annoying, you can easily turn it off from the settings menu.

Playtech developers have succeeded in capturing the essence of Ancient Egypt by incorporating appropriate symbols into a game, whose theme has been greatly overused over the years. The symbols that can earn players high payouts include the all-seeing eye of Horus, the falcon statue, and the scarab. The maximum you can squeeze out of those is 500 credits for five matches. The good thing here is that the all-seeing eye and the falcon return payouts even if you land only two identical symbols on an active payline.

The low payers are once again represented by the overused playing card initials A, K, Q, J, and 10 but these are beautifully embellished with decorations in the typical Egyptian style. The payouts for these low-value symbols range between 5 and 150 coins.

There is also a bonus symbol depicting Anubis, the god of the afterlife. The bonus symbol does not return regular payouts but is used to trigger the pick-and-win game in Age of Egypt. The Playtech developers have included a scatter symbol with what appears to be the beautiful Cleopatra herself, which offers 500 coins for five matches and unlocks the round of free spins. The most lucrative symbol here is undoubtedly the wild with the Pharaoh. It substitutes for the regular symbols in Age of Egypt and is also the top payer here, returning 10,000 credits to lucky spinners. 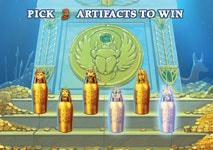 To compensate for the overused Egyptian theme, Playtech developers have overloaded the game with every special feature in the book, starting with the scattered Cleopatra which unlocks 10 free spins. You need three or more scatters to get there, but the efforts are certainly worth it since all winnings generated in the Royal Treasury are tripled with a multiplier. Whenever the scatter partakes in a winning combination, the famed Queen of Egypt is brought to life thanks to the great animations.

Players can also trigger the bonus game by landing three Anubis bonus symbols on adjacent reels. It should be noted that the bonus symbols need to align on the reels from left to right in order to do the trick. Once this happens, the player would exit the main game and will be taken to the heart of the Pharaoh’s pyramid in a treasury vault where hidden treasures lie. There are six golden containers in the vault and each one has a monetary prize inside. The player is granted three picks but the amounts to be won are proportionate to the bet size you have triggered the feature with. The bigger the triggering bet, the higher the prizes hidden in the containers will be.

All in all, Age of Egypt is a great new game to try provided that you can ignore the overused Egyptian theme. Despite this minor disadvantage, this Playtech slot deserves to be a given a chance because of its amazing bonus features. The game has broad betting limits to accommodate all bankrolls, offering low variance and frequent wins.