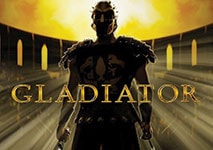 This late 2017 Playtech release is certainly a challenge with its RTP of 95.05% but we all know there is no good fun without a risk and the potential reward of this game is definitely worth taking a few risks. This progressive 5-reel slot game has 25 paylines and a bet range of €0.25 to €125. With a possible win of up to 45,000 times your stake without even entering the fight for the progressive jackpot this game holds some real potential.

If you like the action-packed, drama-filled and powerful setting of the Roman Empire’s gruesome games to the death, this is the game for you. So prepare for the challenging fight for a prize that could change your life. The game starts off with a nice explanatory screen, with great animation and beautiful graphics, introducing you to the setting. The game is based on the 2000 Gladiator movie with some of the characters included as symbols, like Lucilla, Proximus, Tigris of Gaul and Commodus.

The background of the game is with the view of someone right at the Colosseum, ready for the show of their life. There is a great deal of detail in that image which is partially animated with waving flags. It also comes with an epic soundtrack, letting the player get completely immersed in this historical game.

The four high-payout symbols are those with pictures of the characters. The symbols of Tigris and Proximus both award the player the maximum of 200 coins. The Lucilla symbol has the potential to reward you with 375 coins and the Commodus symbol can reach value of up to 500 coins.

The game also offers a stacked Gladiator symbol, which turns into a Wild when in full view. The wilds have a nice animation when they are put into play, showing you the gladiator fighting a tiger, over a fiery background.

There are also Scatter symbols, which take you to a bonus game once you have 3 of them on the screen. The bonus game is called The Arena where you can pick 3 shields with bonuses hidden behind them. Their design is really stunning, with beautiful symbols around the edge and a lion’s head in the middle.

And finally, there are the helmet symbols which are Bonus Symbols. They take you to another bonus game which has bronze, silver and golden helmets. Their designs are consistent with the rest of the game’s theme – they are roman gladiator ones. There are Big Wins and Mega Wins, each of which looks and sounds epic and really remains faithful to the movie it draws from.

As we already mentioned, there is a total of 25 payout lines in this game. During Free Spins, the wins on any of them may be increased. Such is the case during the Arena Free Spins, which can be 5 or more depending on which shields you pick.

The bonuses from the Arena game can be Extra Free Games, Win Multiplier, Symbol Payout Boost (the symbol you pick gets a higher payout), Extra Wild Symbol (the symbol you pick turns into an additional wild), Symbol Pays As Scatter (the selected symbol will spread and pay non-adjacent on a payline) and Gladiator Wild Nudge (which makes the gladiator wild shift into full view every time it appears partially obstructed). All of these last only for the duration of the Free Spins.

In conclusion, this game is a very interesting new addition by Playtech. The bonus features are plenty and with just a little bit of luck, you could win a lot more than your stake back. We recommend you give it a try and see for yourself.