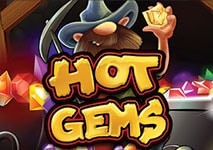 Released in 2012, Hot Gems is a fun video slot that plays over 5 reels, 3 rows, and 25 fixed paylines. The game was created by software supplier Playtech which certainly is not in the habit of developing boring slots as becomes apparent by Hot Gem’s thrilling gameplay, colorful graphics, and fun animations.

This may be one of the older creations of the well-known developer but it manages to remain on par with newer titles from Playtech’s portfolio thanks to its innovative features like the exploding symbols and the collapsing reels. Players will also benefit from wilds, scatters, and a profitable round of free spins with a multiplier. Hot Gems leans towards the higher betting spectrum since betting starts from $5 to reach $625 per spin. Coin denominations range from $0.20 to $25. 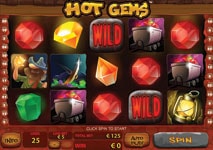 Hot Gems takes players on a journey deep underground where they join a quirky dwarf with a mission – to dig up as many precious stones as possible. The game is set in a mine and starts with a short animated clip which shows you the above-mentioned dwarf mining for gemstones. Some players may complain the visuals are bit old-school but this hardly takes away from the game since the mining theme is beautifully executed.

Every once in a while the dwarf would appear on the main game screen to do a little dance on the reels. The latter are set against an earthy backdrop which further complements the mining theme of Hot Gems. The developers have opted for colorful symbols containing gemstones of different hues – red, yellow, purple, blue, orange, and green, but there are also other thematic symbols like lanterns and mining carts that form the high-paying combinations.

One of the main reasons why Hot Gems continues to enjoy popularity among spinners is its attractive paytable. The game offers substantial payouts on high-value combinations, with the biggest prize standing at 5,000 credits for five dwarf symbols on a payline. The dwarf is the highest-value symbol in the slot but if you take a look at the paytable, you will notice there is a huge discrepancy in the payouts for five, four, and three matches. While five dwarf icons return 5,000 coins, players will receive only 250 and 100 credits for four and three matches, respectively.

The other high-value symbols contain the images of a lit lantern, a pickax, and a cart full of sparkling gemstones. There is a scatter symbols containing the Hot Gems logo which can earn you up to 100 credits and returns even money for two matches. The scatter has no other function but to award payouts for matches on adjacent reels.

The free spins in Hot Gems are unlocked by a separate bonus symbol that reads “Free Games”. The slot also features a wild symbol which improves the odds of earning a payout since it substitutes for all icons, with the exception of the scatter and the free-spins ones. The lowest prizes are awarded by the colorful gem symbols that can earn you anywhere between 80 and 2 credits. 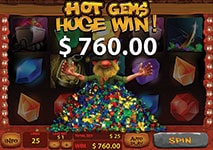 Hot Gems may be one of the older Playtech offerings but it has retained its popularity thanks to its appealing features. There is a wild symbol that increases your chances of success but it appears only reels 2, 3, and 4. One of the most interesting features here are the collapsing reels. Every time you hit a winning combination in the base game or during free spins, the matching symbols would explode and disappear to make room for other icons. The reels would then collapse and new symbols would drop down into the empty spaces to refill them. This process continues on and on until there are no more matches.

You can earn a risk-free payout by activating the free spins feature but you need the Free Games symbol to land concurrently on reels 1, 3, and 5. The first free spin starts with a 1x multiplier but with each subsequent win, the multiplier would increase with one unit until you eventually reach the maximum of 5x. A losing spin would reset the multiplier meter to 1x. The only downside of this feature is that it is impossible to re-trigger more free spins with the same combination of symbols.

The game also features Autoplay. You can activate it and go to grab something to eat while the reels continue spinning on their own, potentially awarding you with more winning combinations. The game allows you to play anywhere between 10 and 99 spins without interruption but if you wish, you can adjust the settings so that Autoplay switches off when the bonus feature gets triggered.

To sum it up, Hot Gems may be an older Playtech game but it has aged beautifully thanks to the ingenuity of the company’s software experts. Practically, the only thing lacking here is the presence of a bonus side game but the fun collapsing reels feature and the round of free spins with 5x multipliers on the wins compensate for this omission.