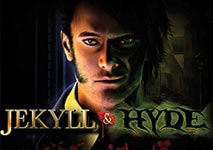 The story of Jekyll and Hyde is a tale about one and the same person who has two personalities that appear at different times. The game is inspired by this classic novel and Playtech’s developers have definitely put much effort into the product’s creation.

It plays on 5 reels, 3 rows, and it has 25 fixed paylines. The game may seem a little bit dark and creepy at first glance, but after the first spin of the reels, you will immerse yourself in it and see that in fact, it is quite entertaining. 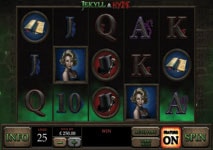 The game is based on Robert Louis Stevenson’s novel which tells the story of Dr. Jekyll’s transformation into Mr. Hyde and the troubles it causes. The setting of the game is quite mysterious and dark and it is complemented by the eerie soundtrack you hear while you spin the reels. Even though it has a dark appearance, the game offers superb graphics. The reels are also shrouded in mystery as in the back, there is a stone wall and green smoke that spreads all over the screen.

The intriguing and exciting gameplay is also supplemented by the wide array of theme-related symbols. Players will come across a notebook, а top-hat with a cane, a gentleman’s portrait, portraits of two female characters from the story, a laboratory flask, and card initials.

Playing Jekyll and Hyde could not be easier as there are no any sophisticated rules and features. The game gives you the chance to set the coin value which ranges between 0.25 and 125.00. In addition to this, players can also enjoy the game numerous times without interruption as there is a button “Autoplay”.

The game is packed with numerous symbols that remind you of the Victorian era and give you the opportunity to increase your winnings. The wild symbol in the game is Dr. Jekyll. It appears only on reels 2, 3 on 4 and it can substitute all symbols with the exception of the scatter ones. If a winning combination is possible, the wild symbol expands and covers the whole reel.

The scatter symbol, however, is represented by the laboratory flask. If you get three or more scatter symbols, they will trigger free spins. Here you are given the opportunity to choose between two options – Jekyll Spins or Hyde Spins. 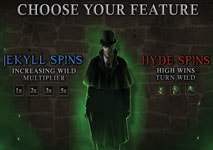 Jekyll and Hyde does not offer only various attractive symbols. The game enables players to take advantage of its numerous additional features that can further increase their profit. As it was already mentioned, free spins can be activated when three or more scatter symbols land on the reels. Then, during free spins, you are given the chance to choose between two modes: the Jekyll Spins and the Hyde Spins.

Both free modes continue until you get four scatter symbols on the last reel. Players need to bear in mind that each time a scatter hits, part of the potion in it is used up. This means that after four hits, the bottle breaks and the free session ends up. The rule for the duration of the free-spins session refers both to the Jekyll and the Hyde Spins.

During the Jekyll session, every time the scatter symbol lands, the Wild Multiplier increases as follows 1x, 2x, 3x and 5x. Every time the scatter hits, during Hyde Spins, one of the three highest-value symbols acquire the power of the wilds for the rest of the round, thus increasing your chances of winning substantially. These are the symbols of the gentleman and the two ladies.

Jekyll and Hyde also offers a Feature Bet that can help you increase your winnings. Still, players are given the chance to decide whether to take advantage of this feature or not as there is a button that activates it. It can be turned on before each spin of the reels. If you want to make use of it, you need to know that it doubles your total bet and powers up scatters.