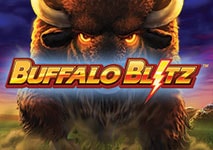 When it comes to online slots everyone is looking for a game that provides as many winning possibilities as possible. This is why Buffalo Blitz might be the right online slot for numerous gambling enthusiasts. With 6 reels and 4,096 ways to win, this video slot will catch the attention of those who are interested in generous payouts.

What makes Buffalo Blitz even more interesting is the fact that players have the opportunity to enjoy the Free Games feature and boost their winnings to a great extent. There is even the chance of winning up to 100 Free Spins. The online slot is powered by Playtech which is a leading software company in the iGaming industry and Buffalo Blitz is for certain a proof for the gaming developers’ hard work. 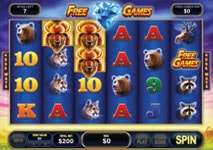 If you take a look at this slot you will see that it is all about the wild animals you may encounter in Alaska or Syberia. The creators of the games have chosen the buffalo as the mascot of the game and the main wild creature of the slot. Step into the world of North America’s wildlife and play with some of the animals of the Taiga.

Take a dive into this wild adventure and explore the fortune the habitat of the North American Taiga can bring to you. Among the symbols of the game, you will see animals such as grizzly bears, lynx cats, raccoons, wild moose and buffalo which was the inspiration for the title of the game.

Behind the reels, you can see the mesmerizing skies of the Taiga, as well as the grassland where you can probably meet all the wild animals that make the game so exciting. Playtech’s developers have made sure that both the visual and the sound effects of the game are on a high level of quality which can present players with the ultimate online slot experience.

Considering the name of this video slot, it is only natural that the Buffalo symbol is the one with the highest value and it will bring players the highest payout if they land six Buffalo icons. The rest of the wild animals also represent the high-value combinations of the online slot. There are also the commonly used cards such as Nine, Ten, Jack, Queen, King and Ace which represent the low-value symbols of Buffalo Blitz.

The Buffalo symbol can also stack on each of the six reels in the main game. The Wild symbol is a diamond and the Scatter is a Free Games icon. Both in the base game and the Free Games, the Wild can appear on all reels, except for the first one, and it can replace any other symbol, with the exception of the Scatter. When a Wild symbol is a part of a succssful combination in the Free Games spins, it randomly multiplies the win by either x2, x3 or x5.

When three or more Free Games Scatters appear anywhere on the reels, this will trigger up to 100 Free Spins which have the potential to award players with pretty impressive payouts. If two or more Scatters land on the reels during the Free Games, the feature is re-triggered. 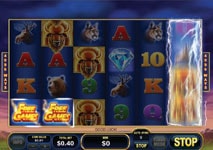 Although Buffalo Blitz may not be the slot with the most intriguing theme and animations, it can certainly catch the attention of avid players who are on the lookout for a fruitful betting adventure. With six reels and 4,096 ways to win, this online slot presents players with various winning combinations that can help them boost their gaming balance immensely.

As mentioned earlier, the Wild diamond symbol can substitute all symbols in the game, except the Scatter. This means that when you land a Wild you might have a better chance of hitting one of the 4,096 winning combinations of Buffalo Blitz. When you activate the Free Games feature, the Wilds can randomly multiply the players’ winnings. In the Free Games, the multipliers can be either x2, x3 or x5.

Playtech has definitely worked hard to provide players with a fun and highly rewarding game. Unlike the 5 reels that most players are used to seeing, Buffalo Blitz has 6 reels and it provides an abundance of winning options that can make the outcome of every spin lucrative. With the Auto Play function players can set a certain number of spins that can be played without any interruption. There is also a Turbo Mode which turns off some of the win animations and sounds, thus making every spin of the slot faster.