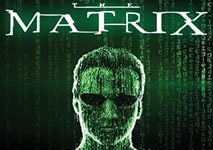 The Matrix, a movie so emblematic that it still makes some people wonder – are we living in the real world? Playtech has undertaken the great burden of giving something so familiar a new form. And we are glad to say that they have succeeded. This relatively new slot (released in late 2017) has 50 paylines and a 95.14% RTP. That may be a little lower than the perfect 96% and above but given all the bonus features of this game – you will not even feel the difference.

The bet range starts at €0.50 and ends at €100. It has a great autoplay addition which is called ‘Until Feature’ and it is pretty self-explanatory. There is also a Turbo Mode button which does not affect the functionality of the game at all. It is honestly our pleasure to present this new addition by Playtech. 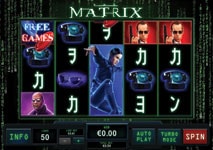 Everything about this game is a perfect adaptation of The Matrix. The design – from the background, the digital rain which is the matrix itself, constantly shifting, to the symbols and the buttons – it is all exactly what one would expect of a slot adaptation of this iconic movie.

Not only that, but you get some of the most awesome scenes from the movie. Who does not love seeing Trinity’s slow motion kick over and over again – it is one of the coolest scenes in the whole trilogy! Morpheus, explaining the whole blue or red pill thing? Awesome!

The music is also just right. The simple background music is tense and dramatic, the bonus games music sounds like it was taken right out of the movie. The only sound that does not fit well with the others is when you win only a small amount. But when your win increases, the music goes on and then the whole composition is on point.

The graphics and animation are gorgeous. The slow motion is something that they definitely could not have gone without and it is put to use perfectly; it all just ties in together so nicely that it makes you want to rewatch the movies.

For the low-value payouts, we have actual symbols from the digital rain and not your usual cards A, K, Q, J, 10 and so on. There are four of them, the first pair’s maximum win is 50 coins, while the second one’s is 75 coins. There are also two more low-value symbols – that of a telephone and Neo’s sunglasses. The maximum win with them is 125 coins.

The high-value symbols are of Trinity, Morpheus and Agent Smith. They can be either stacked or appear as a single symbol. Five of Trinity’s symbols are worth 150 coins, the same number of matches with Morpheus’ awards 200 coins and Agent Smith’s symbols of the same number are worth 250 coins. Once you gather 2 or more of the identical symbols next to each other, the base screen shifts and you see a scene from the movie with the character whose symbols you have collected.

Here we have two wild symbols, one of Neo in his code form and one of the black cat glitch. The first one has the usual substitution function but the second one appears only on the fifth reel and if it covers the whole reel, it also covers the first. Then things shift and you get the scene with the cat as well.

Then there is the free games symbol, which is of the red and blue pills. 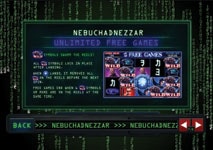 So once you get 3 free spins symbols on reels 1, 3 and 5, you get to the bonus game. You get the scene with Morpheus, explaining what each pill does, though it does not really make sense in this case as the two choices are either 8 free spins with more Agent Smith symbols or unlimited free games with sentinel wilds.

The first option is the red one, where Agent Smith basically takes over the base screen bit by bit and since his is the highest value symbol, you get a load of coins out of this. The second option is the blue one and you get sentinel wild symbols which remain on the base screen while the rest of the symbols roll on. However, if a lightning rifle symbol appears, they fall off. The free spins end when more than 6 sentinels are on the reels at the same time.

We already mentioned the cat symbol’s function but it is worth going over in more detail. It is called the déjà vu shuffle. So as we said, you get two reels entirely covered in wilds and then a shuffle for a chance of an even bigger win. Keep in mind that there are 50 paylines in this game, so this means that you are going to get a solid amount of coins no matter how the symbols settle.

Overall, this game is not only appealing to your nostalgia and love of The Matrix, it is well worth your time because you will get some amazing wins. We promise there will not be any glitches that erase your wins.