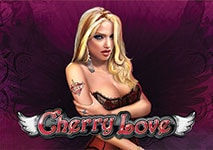 Cherry Love is an older slot game, released some time in 2009. It was created by Playtech, one of the largest companies in the online casino industry with a history going back more than 20 years. Despite its age, Cherry Love is still relevant in today’s market and we would like to bring your attention to it.

The game comes with 5 reels and 30 unique paylines, where you can form winning combinations. The betting limits of Cherry Love are somewhat more conservative than other offerings by this company, with the maximum bet going as high as $30. This is achieved by placing a bet on each of the paylines ranging from $0.01 to $1.00 per payline. Additionally, Cherry Love is also accessible to a wide player base, being available on both desktop and mobile devices. 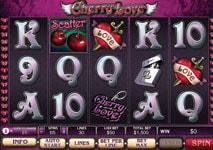 The theme featured in Cherry Love is one of eroticism, with the game portraying scantily-clad women and various figures of lust. The visuals are made up of pink or dark purple, placing emphasis on the seductive nature of the game. Moreover, the background music is perfectly suited for this type of aesthetic and only works in the game’s favor.

Visually, Cherry Love is still as beautiful as it was when it was released in 2009. Despite the game’s age, it is still able to stand toe to toe with most modern titles and it is by no means ugly.

There are plenty of symbols in Cherry Love and in this point, we will go over all important ones. Based on how important a symbol is in the game, we can classify them into three separate groups.

The Low Paying category is made of high card symbols, ranging from Nine To Ace. To form a winning combination with a symbol from this group, you would have to line up three or more of the same type.

Following that, we come to the High Paying Category, where we find symbols such as the lighter, the ring, the heart and the rose. These symbols pay significantly more than the other category and the heart and the rose can form winning combinations starting from 2 symbols, instead of the usual 3.

Finally, we come to the Special group which consists of the Wild and Scatter. The Wild symbol portrays a provocatively-dressed blonde and it will substitute for all Low and High Paying symbols in the game. Moreover, it will expand when it appears on the second, third or fourth reels. After that, we have to take into account the Scatter symbol which takes the form of two cherries. This symbol will reward you with a round of free spins when certain conditions are met. 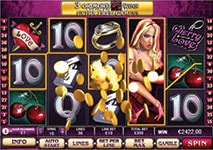 Cherry Love is not particularly rich in features, but there is still enough to keep player’s attention. As we mentioned above, the Scatter symbol is the key to unlocking free spins. This can be done by spinning 3 or more Scatters anywhere on the reels, regardless of their positions. When this happens, the player will earn 15 free spins with a 2x winnings multiplier.

During the free spins, Expanded Wilds can appear on the second, third and fourth reel on each spin. The Expanded Wild will move to the next reel after each spin, returning to the second reel after a being on the fourth. Moreover, free spins can be retriggered infinitely, with 3 Scatters activating another round of 15 free games. This increases the potential value of the free games exponentially.