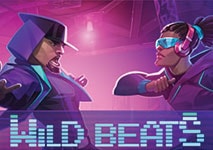 Wild Beats is a brand new slot game, made available to the mass market only in July of 2017. It is created by Playtech, one of the most prestigious companies in the online casino software development scene and a leader in its respective industry.

Wild Beats comes with 5 reels and 25 unique paylines, much like most other slot games. This game comes with very limited betting limits when compared to other slots of the same type. Basically, users are able to wager between $0.01 and $0.40 per payline. This results in a minimum bet of $0.25 and a maximum of $10.00. It seems to be a trend of newer Playtech titles to reduce the maximum bet of the game, especially when compared with older games, that, at least, allowed for 3-figure sums to be wagered.

While most players will not likely bet hundreds of dollars per spin, it does not hurt to have that option available to the few who can actually play with that kind of money. Wild Beats pays left to right and therefore, each winning combination has to start on the left reel and continue along one of the designated paylines. 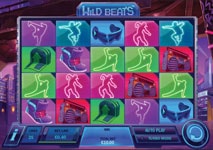 As you can imagine, Wild Beats is a music-themed slot game. More specifically, users are treated to a futuristic aesthetic, with quite a lot of neons flashing on the screen. The game is very colorful and we can clearly see that the graphics design team really put in a lot of effort in creating these visuals. On the music side of things, when we hear that the game’s name is Wild Beats, we normally expect the game to feature some awesome music. That is exactly what we get.

The background track is upbeat and lighthearted, immersing you fully into the aesthetic of the game. Additionally, the animations are just as impressive as the graphics, moving on the screen without any stutter or slowing down. All in all, Wild Beats is very visually impressive and we can certainly commend Playtech for creating such a great game.

The symbols in Wild Beats are as good as any you can find on the Internet. They are unique compared to those of other slot games and we can see that a lot of work went into drawing them. The first group – the Royals – consists of five different symbols, each portraying a different dance move. After that comes the High Paying group, where we see various items associated with the theme of the game, such as a hat, sunglasses, headphones, sneakers, and a boombox. Whereas most other symbols would need 3 or more of the same type to form a winning combination, the boombox and the sneakers can do so starting from 2 of the same. The boombox is also the highest paying symbol from the two categories, rewarding players with 500 coins if they manage to line up 5 of that symbol in succession.

Then we come to the Special category. Here we find two symbols – the Wild and the Special Wild. The Wild will only appear on the odd reels and will substitute for any other symbols, with the exception of the Special Wilds. Moreover, it is also the highest paying symbol in the game and those who manage to line up 5 of it on a single payline will receive 5,000 coins. The Special Wilds act as normal Wilds except when the Dance It Out! Feature come up, which we will discuss in the next point. 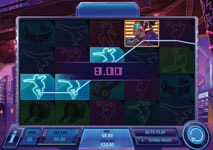 The Dance It Out! feature is the primary attraction of the game and it will make your experience with it much more memorable. When 2 Special Wilds land on the second and fourth reel the Dance It Out! feature will trigger. When it happens, any of the so-called Royals symbols on the second, third and fourth reel will turn into Wilds. As you can imagine, this could potentially lead to some massive wins.