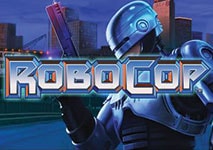 Slot developers often rely on popular blockbuster movies for inspiration, which has resulted in the release of a huge number of branded games. Leading developer Playtech serves as the perfect example of this trend as the company is responsible for numerous branded games, based on superhero flicks like Batman vs Superman, Justice League, and Suicide Squad. Robocop is one of Playtech’s latest branded releases and was launched across online casinos in July 2017.

The game quickly became a massive hit among reel spinners and there is a good reason why – the RoboCop slot commands the attention with a bevy of fantastic features, thematic animations and sounds, and a fuss-free gameplay. Other than this, RoboCop is a 5-reel slot which features 3 rows and 25 fixed paylines. The game is a great option for reel spinners with smaller bankrolls since betting ranges between $0.25 and $25.00 per spin. 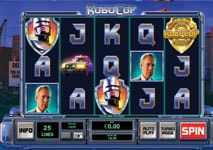 Fans of the popular franchise have a reason to rejoice since the Playtech developers have decided to base this innovative slot on the original RoboCop flick that was released back in 1987 instead of going for the modern version from 2014. RoboCop comes to life on the five reels, which are set against a backdrop showing the dystopian Old Detroit where the action in the original film takes place. The reels rotate in a metallic casing to complement the futuristic theme of the game.

The symbols are slightly cartoonish in style but this hardly takes away from the game. The high payers all feature characters from the film so players will be joined by police officer Alex Murphy (aka RoboCop), his partner Anne Lewis, and Dick Jones, the CEO of the fictional corporation Omni Consumer Products (OCP). The low payers are also styled in line with the futuristic theme and consist of the metallic initials of playing cards J, Q, K, and A.

Many slot mavens prefer to play RoboCop even if they are not fans of the popular 1987 film because the game offers a rather attractive paytable. The highest prizes are awarded for matching thematic symbols like RoboCop, Anne Lewis, Dick Jones, RoboCop’s car and his gun. The smaller prizes go to players who succeed in landing three to five playing card symbols and range between 5 and 90x the line bet.

The software developers have also included a wild in the game which is easy to recognize since it contains the RoboCop logo. The wild can stand in for all other symbols except for the bonus one, thus increasing the odds of completing winning combinations. Apart from this, the wild returns the highest payouts in the game and can earn you 2,500/500/150 coins for three, four or five matching symbols.

Since the game also offers free spins, there is a bonus symbol that unlocks them. It consists of a shiny police badge that reads RoboCop in the middle. When the badge symbol lands on reels 1, 3 and 5, it triggers the lucrative RoboCop Bonus feature. 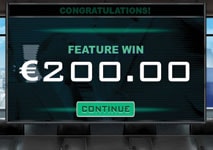 Playtech developers have done a great job in crafting a very interactive game overloaded with special features. There are four “robotized” bonus features which are triggered randomly during the main game. They can practically occur on any spin regardless of the stake size. The first one is the Shootout Spin feature which disperses wilds in several random positions. This is followed by the Robot Attack Spin feature which adds larger wilds on the reels.

The third robotized feature is called the Line-Up Spin and the payouts on winning lines are boosted by two different multipliers. And finally, we have the OCP Bonus feature where players can enter the mega-corporation’s offices to pick matching symbols and collect extra cash prizes. Since these four features are not linked to a particular symbol combination they cannot be retriggered.

Whenever players land three scatters on the first, third, and fifth reels, they trigger the Pick-Your-Bonus feature, which pretty much consists of “improved” versions of the four random robotized features. The options are as follows – 10 free spins with random appearing wilds, 5 free spins with enlarged wilds on reels 2, 3, and 4, 15 free spins with 2x multipliers on all winning combinations, and the OCP Mega Bonus. The latter is practically the same pick-and-win type of bonus game as the one in the random OCP Bonus but the winnings are enhanced by a 5x multiplier.

RoboCop is a great game to play if you are looking for a graphically impressive slot with lots of cool bonus features to maintain your interest. The game comes with low to medium variance which significantly improves spinners’ chances of pocketing the fixed jackpot of 2,500x the line bet. To sum it up, this Playtech offering definitely deserves to be given a chance even if you have never seen the 1987 blockbuster. Who knows, maybe you will after you check out this innovative slot.