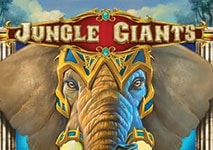 Jungle Giants is a 5-reel and 50-paylines online slot that runs on Playtech’s software platform. It has an interesting theme going on and players can explore the adventures of several animal-kings of the jungle. With special giant symbols, Wilds and Scatters, this game can make your virtual gambling both entertaining and fruitful.

The game is compatible with both desktop and portable devices which means that it can run smoothly even when you are playing on your smartphone or tablet. At first glance you would think that Jungle Giant is no different than the rest of online slots, however, you will be wrong. With its giant symbols that appear on the reels and the Giant Free Games feature, this game can provide players with the best interactive slot experience and help them sweep giant wins. 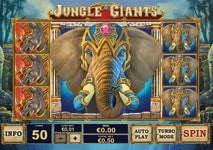 The developers of this games are definitely supporters of the saying ‘the bigger, the better’. As soon as you load the online slot, you will see that everything in the game is huge. The animals used for the icons of the game are all among the biggest habitants of the jungle and the Giant symbols that can land on the majority of the slot are also impressive in size.

Players who decide to test their luck on this online slot will explore the beauty of the untamed Jungle nature and its fauna which includes gorillas, rhinos, buffalos and hippos. All of the animals have colourful headpieces and robes which are decorated with gems and golden ornaments. The background of the game depicts a temple in the middle of the jungle. On both sides of the temple, there are majestic statues of elephants. The design of the game is definitely very intricate and the sound effects can easily carry players away into the jungle where the whole action of the game is developed.

The game’s creators have chosen some of the biggest animals of the jungle as characters which spark both feelings of admiration and fear. Among the icons of this slot, you will see an elephant, a gorilla, a rhino, a hippo and a buffalo. The jungle kings represent the high-value symbols which can bring players a better payout. For the symbols with a lower value, the game developers have chosen the Ten, Jack, Queen, King and Ace cards.

To provide players with better opportunities for a fruitful game, Jungle Giants also has Wild symbols which can replace any other symbol on the reel, except the Scatter, and form a winning combination.

The Scatter symbol of this game is probably one of its most interesting features. It covers completely the second, third and fourth reels and has the Giant Free Games logo. In fact, all the high-paying icons of the game can appear as a giant 3×3 symbol. 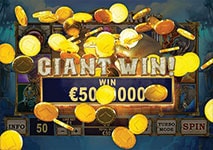 Before you start spinning on Jungle Giants, you can adjust your bet size by using the control buttons below the reels of the slot. There is also an Auto Play button which allows players to set a few spins which will be played without any interruption. If you switch to Turbo Mode the reels will spin faster and the action of the game will develop quicker.

As it was mentioned before, the Wilds can replace any other symbol, except the Scatter. This way they can form different winning combinations. What is more, there is a separate payout for two or more Wilds that land on an active payline.

The Scatter symbol appears on the second, third and fourth reels and it covers almost the entire slot. If the Scatter fully covers the middle reels, the Giant Free Games feature will be triggered. This will award players with 8 Free Games during which all low-value symbols will be removed from the game. All symbols on the second, third and fourth reels are replaced with giant ones and all of the symbols on the first and last reel are stacked.

While you are playing the Free Games, the winnings of every round will be displayed in the Win field and the total of all wins will be shown at the top right part of the playscreen. The Free Games are played automatically and once they are complete there will be a summary of the winnings from all Free Games rounds.

It is possible to land a full Scatter on the second, third and fourth reel while playing the Free Games spins. This will re-activate the Giant Free Games feature which means that players may actually enjoy more than 8 Free Games rounds. This can ultimately make their game extremely rewarding.

Playtech has definitely done a great job with the creation of Jungle Giants. This 5-reel online slot can provide a lot of fun thanks to its advanced features and Wild and Scatter symbols. The game’s visual and sound effects are very enticing and the numerous winning possibilities can tempt any fan of slots to test his/her luck.