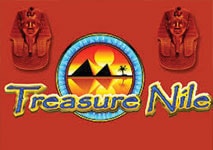 Treasure Nile is one of the most popular slot game currently on the market. Created by Microgaming and released to the general public in early 2004, it has found its place in the hearts of many gamblers worldwide. Despite its long lifespan, Treasure Nile is still available at a large number of online casinos and will forever be considered a classic in the genre.

The game features 5 reels and 9 individual paylines. The betting options are less than ideal, considering the fact that the maximum bet is limited to $4.50. The game allows you to wager $0.50 per payline, with no variation in the size of this bet. Additionally, you may also choose the number of paylines to play with, however, your best experience will be when playing with a 9 of them. A maximum bet of $4.50 is simply ridiculous in this day and age and we cannot help but feel disappointed with how the game has aged in this respect. Treasure Nile pays left to right, which means that each winning combination has to start on the leftmost reel and continue along one of the paylines. 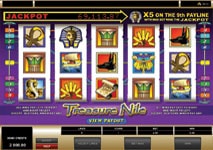 Treasure Nile comes with a distinct Ancient Egypt theme, showcasing the Pharaoh’s riches and giving a chance to win some of them. The graphics come in the style seen in the early 2000’s – cartoonish and two-dimensional. Bluntly put, the game has not aged well when compared to some other titles from the same time.

The visuals look bland and sometimes silly, failing to impress. However, this is mostly to be expected from a game this old. Still, Treasure Nile does have a timeless charm to it, which is what has kept it alive for all these years. It mostly boils down to personal preference and each player has to make their own decision.

There are plenty of symbols in Treasure Nile, all of which feature some aspect of Ancient Egypt. In terms of gameplay, we can classify them into 3 separate categories, depending on what function they serve in the game. The Low Paying category is made up of five symbols – a sheath of wheat, a ship, a column, a scroll and a rattlesnake. The High Paying group, on the other hand, includes five other symbols, which pay significantly more. These are an ornate necklace, the ankh, the head of Anubis, a pyramid, and the Pharaoh symbol. The Pharaoh symbol is the most worthwhile in the game, paying out 6,000 coins to whoever manages to line up five of it on a single payline.

Of course, Treasure Nile comes with two Special symbols, which are the Wild and the Scatter. The Wild is the game’s logo and it can substitute for any other symbol on the paylines, except the Scatter. Regrettably, it does not come with its own paytable, which reduces its potential value. The Scatter takes the form of a Scarab and it can form winning combinations, without needing to be on any payline. If you spin 5 Scatters at once, you will be rewarded with 50 coins. 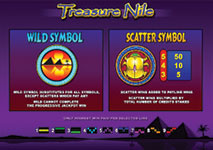 The progressive jackpot of Treasure Nile has a minimum value of $40,000 and it can only go higher from there. The concept of winning the jackpot is rather simple, all you have to do is spin 5 Pharaoh symbols on the ninth payline. For this purpose, you will have to play at the maximum wager. Additionally, the Wild cannot substitute a Pharaoh symbol when winning the progressive jackpot.

Aside from the progressive jackpot, there are no other worthwhile features in the game. It is rather disappointing to see Treasure Nile lack free spins or bonus rounds, but the jackpot should be a satisfactory goal for most players.