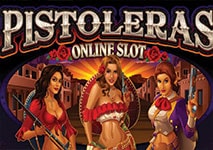 Casino software developers have introduced us to a number of slots inspired by the Wild West but few of them feature attractive female outlaws for the main characters as is the case with Microgaming’s 2015 offering, aptly called Pistoleras. In case you are wondering, the name of the game is derived from the Spanish language and translates as “holsters” in accordance with the slot’s American-frontier theme.

Pistoleras utilizes 5 reels, 3 rows, and 25 fixed paylines players can receive payouts from. The game resembles a typical video slot from Microgaming’s library and is not all that impressive in terms of design but is easy enough on the eyes. It offers a hassle-free gameplay and supports bets of up to ten coins per payline, with their value varying anywhere between $0.01 and $5.00. Pistoleras is suitable for all sizes of bankroll since the minimum and maximum bets across most Microgaming-powered casinos stand at $0.25 and $1,250.

In addition to its flamboyant symbols, Pistoleras will surprise chance-takers with a wealth of special features. In truth, nothing is omitted from this slot’s design as it offers wild and scattered symbols, free spins, and a pick-and-win type of bonus game for extra profits. 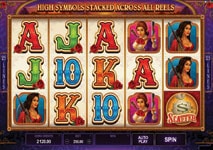 As mentioned above, the spinning action in Pistoleras takes place in the Wild West, which holds a very special place in US history and was normally inhabited by colorful characters like sheriffs, outlaws, cowboys, and Indians. Here you will see nothing of this kind, though. The game’s characters are in fact three beautiful (and scantily clad) female outlaws who generously reward the highest regular prizes in the slot.

Each of the three ladies is dressed in a particular manner and uses a different type of gun. The developers have once again opted for the overused card initials for the symbols that offer the low-value prizes.

Where design is concerned, the game kind of resembles the older titles from Microgaming’s video slot collection, which is to say the five reels are non-transparent and occupy most of the base-game screen leaving hardly any space for the backdrop. The background is of purple hue and one can see the sun setting above the reels. The reels are encased in a golden frame, adorned with red roses.

The background music and the sound effects further complement the Old West theme. As you spin the reels, you can initially hear only the usual buzz of the bells and whistles, associated with slot machines. Lucrative winning combinations are accompanied by guitar music. During free spins, the monotonous background sounds give way to a lively mariachi song which makes you tap your feet in time to the music.

There are three regular paying symbols awarding prizes in the base game, each one represented by a different female outlaw. The gal with the red sombrero and the rose tucked behind her ear returns a prize of 2,500 coins for five identical symbols. Next in line is the gal with the guitar slung behind her back who can earn you as much as 2,000 coins. She is followed by the girl in the red low-necked dress holding a rifle – five of these return 1,750 coins. The interesting thing about these girl symbols is that they can all appear stacked across the reels during the base game, awarding you with even higher payouts.

The low-value symbols are the standard playing cards 10, J, Q, K, and A but decorated with red roses. These offer payouts that range from 50 to 1,200 coins but you have to bet the maximum of ten coins per spin to earn this much.

One of the most distinctive traits of Pistoleras is that it features not one but two different scatter symbols, and each of those has its own function. The scatter with the Western coach returns payouts for as little as 2 matching symbols but five of those can result in a payout that is up to 25,000 times the line bet. Additionally, the scattered coach triggers the round of free spins when it lands simultaneously on reels 3, 4, and 5.

The second scattered symbol in Pistoleras contains a sack full of gold coins the three outlaw girls have probably stolen from the local bank. It offers a payout of 500 coins for three matches and unlocks the Saloon Bonus when it hits reels 3, 4, and 5 concurrently. To boot, there is also a wild with the Pistoleras logo. It substitutes all other icons, except the two scatters, and triples your payouts when it is part of a winning combination. The wild is also one of the most lucrative symbols in the game since it pays 10,000 coins for five matches. 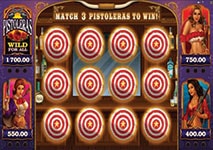 Pistoleras may not offer jaw-dropping graphics and animations but one can hardly complain about that considering how many special features the game is equipped with. Players can increase their profits by activating the round of free spins. For the purpose, you need at least 3 scattered coach symbols on the same spin, upon which you are awarded 15 bonus rounds. Those who match 4 or 5 scattered coaches receive 20 and 25 free spins, respectively. The wins are tripled during free spins which can also be retriggered with the same symbol combination.

One of the most interesting things about Pistoleras is that the bonus pick-and-win game can be triggered even during free spins – now, that is something that few video slots can offer. The Saloon Bonus is activated whenever the player lands three scatters on reels 3, 4, and 5. The player is then taken to a separate screen containing 12 targets.

Pistoleras is a great game for those of you who prefer to play low-variance slots. Payouts are awarded fairly frequently to the benefit of players with smaller bankrolls. The free spins and the Saloon Bonus also get triggered quite often, helping you earn a little extra in a risk-free way. The generous paytable also makes this game worth trying so if you are enthusiastic about traditional Microgaming video slots, give its reels a whirl.