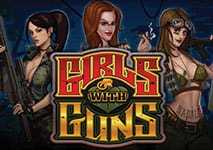 Girls with Guns is a popular slot series created by Microgaming, one of the top companies in the online casino software development scene. This software provider was one of the first to start making games for online casinos back in the 90’s and more than two decades later it stands as one of the best in the business.

Girls with Guns was released by in 2014 and a stable player base has built up around it. This game features 5 reels and a 243-ways-to-win system, allowing players much more diversity when forming winning combinations. The betting options are also perfectly adequate, with 30 coins being wagered on every spin. The value of these coins ranges from $0.01 and $0.05. Additionally, players may also decide to increase the number of coins wagered by increments of 30. Therefore, you may bet up 600 coins, each with a value of $0.05, which results in a maximum bet of $30.00. 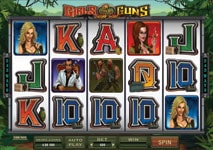 Girls with Guns is the slot game version of an action film. Much like the title conveys, here we see various women armed with all manner of guns. The setting of the game resembles a 1980’s action film. The background image is one of a lush jungle, while on the reels we see the various symbols portraying the characters.

The music running in the background also contributes to the slot’s overall atmosphere, immersing you fully into the experience. The graphics are beautiful to look at and the animations run very smoothly. In terms of presentation, Girls with Guns is highly impressive.

There are plenty of symbols to be had in Girls with Guns. Much like any other slot game, we can separate them by their payout ratios and specific function in the gameplay. The Low Paying Category consists of high card symbols, ranging from Ten to Ace. These are your run-of-the-mill high cards and there is nothing special about them. Following that, we come to the High Paying Group, where we see various characters such as the girls, the main bad guy, and his hired goons. The Katherine symbol is the highest paying out of all of these, rewarding 400 coins to those who line up 5 of that symbol in succession.

The final group of symbols features the Wild and the Scatter. The Wild symbol is the game’s logo and it will substitute for any other Low or High Paying symbol on the reels. The Wild does have its own paytable, but it is identical to that of the Katherine symbol, which while not bad is nothing to write home about either. There is also a Special Wild in the game, which serves the exact same function as the Wild. However, when it lands on the third reel it will expand and cover all 3 positions on the reel. This symbol can only appear in the base game.

The Scatter symbol is represented by a heart-shaped grenade and it can set off a round of free spins when certain conditions are met. Moreover, it also features its own paytable, rewarding 3,000 coins for lining up 5 Scatters next to each other. 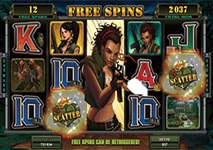 Girls with Guns is not a progressive game and therefore, does not include any jackpots. However, the game is not devoid of features and one of the most popular is the free spins feature. Triggered when the player spins 3 or more Scatters at once, the game will award you with 15 free spins. On each spin, a random reel will be turned into a Wild one.

Additionally, free spins can be retriggered. If you hit 3 or more Scatters at once during the free games, you will be awarded 15 additional spins.