Baccarat is one of the most exciting casino games of all times and as such, it is played by a number of players worldwide. Nowadays, the game, along with its many versions, can be found in many land-based casinos as well as online. Presently, the most widespread version of Baccarat, Punto Banco, is the game that is offered by the majority of the casinos. Furthermore, a number of online casinos offer its players the opportunity to not only enjoy Baccarat virtually but also play the game in real time with a fully-trained dealer. This way, they have the chance to get a very genuine feeling of it without having to leave their home.

The game undoubtedly appeals to a huge number of gamblers globally which is the reason why it is available in a number of casinos. Even though it is predominantly a game of chance, it is essential to get familiar with all of its rules, before playing, in order to be able to fully comprehend its fundamental principles and idea. It is worth mentioning that besides luck, players should also have money management skills as without them, even if they win, they won’t be able to retain their profit.

The Role of the Banker

In many land-based casinos, the Baccarat tables can be found in a separate section, conveniently designed to provide players with the needed privacy, or in the area where the rest of the table games are positioned. They can be easily distinguished as they remind of the shape of an hourglass. Each one of them have a middle area from which two dealers bank the game while the caller directs the gameplay. The caller is the person who is responsible for dealing the cards, whereas the dealers are in charge of managing the bets of the respective side of the table.

The Baccarat tables vary, depending on the version of the game and the respective casino. The seating capacity also differs from one table to another but in most cases, the common Baccarat table offers 14 available spots for players. It is worth noting that every table has 15 seats, however, the number 13 one is omitted as it is considered to be unlucky. Once seated, players will find in front of them, an area for placing bets which is conveniently separated into three sections.

There are three available betting options from which they can choose: “Players”, “Bankers” and “Tie”. Every bet has different house edge and therefore, it gives players higher or lower chances of winning. Besides operating the game and managing the bets, the dealers are also responsible for keeping track of the commission that every player needs to pay. Usually, at the centre of the Baccarat table, there are commission boxes, especially designed to serve this purpose.

Baccarat is a card game whose basic rules are moderately easy to comprehend which makes it suitable for all types of players. It can be played with six or eight decks which are placed in a box, called a ‘shoe’. The set rules are automatic, meaning that the dealer operates the game, without the need to consult with the players. In brief, players have to choose one of the three available bet options and after that, two hands are dealt. The highest possible total in Baccarat is 9 and thus, the winning hand is the one that has the closest possible value to this number.

Unlike other card games such as Blackjack, players can never exceed the highest possible total and therefore, it is not possible to go bust.

The Role of the Banker 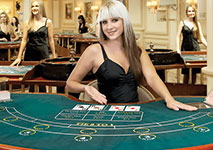 In Punto Banco, the role of the banker is performed by the participants in the game as all of them, take turns with the dealing of the cards. Usually, the first player who gets to be the banker, is sitting at the first position on the table. The role of the banker is passed to the next player from right to left and his turn is over when he loses a hand. It is also possible to reject to be the banker in which case, the next player automatically takes this role. Another important think to consider, when it comes to the banker’s positions, is that the respective player have the same betting options as the rest of the participants in the game, however, it is customary that he places his wager on the ‘Banker’ section.

As already mentioned, the three possible bets that can be made are: “Player” (Punto), “Banker” (Banco) and the rarely considered one – “Tie” (Standoff). After the players have chosen and placed one of the three bets, their move is done and there aren’t any more decisions to be made. It is worth noting that the ‘Player’ bet should be viewed as an independent one. The same goes for the ‘Banker’ bet as it doesn’t belong to the casino. To clarify this matter further, let’s have a look at the gaming process and the rules behind it.

In Baccarat, regardless of the number of participants in the game, only two hands are dealt, each one consisting of two cards. The game is conducted in the following sequence – first, players make their bet choice and then, the banker deals two cards that are face down. The caller passes his hand to the player who has placed the highest bet on the ‘Player’ section. The respective player gets to look at the two cards before giving them backing to the banker.

If no one from the participants in the game have put such a bet, the role is taken by the caller. After the dealing of the cards is done, the player’s hand is first revealed and then the banker’s one. These actions are proceeded by announcing the total of the hands, after which the dealer can request a third card to be dealt. Players should bear in mind that the third-card rule can vary, depending on the casino and the version. In case that the total happens to be 8 or 9, no more cards are dealt as the hand results in an instant win. The final stage of the game is the payout which is done by the dealers.

Assigned Value of the Cards

Like many other card games, in Baccarat, the cards are assigned a particular point value and in this case, their card suits become irrelevant. This is one of the most important rules in the game and as such, players should learn in order to be able to play the game correctly. In comparison to other card games, the assigned values in Baccarat are moderately easy to remember which makes the game much more simplified. The assigned value of each card is as follows:

Every combination of two cards, that reaches or exceeds the value of ten, has to be adjusted. In such cases, players have to remove the first digit of the total as the highest value in the game has to be 9. For instance, if the two cards happen to be 8 and 5, their total will be 13. Therefore, the first digit, one in this case, should be removed and as a result, a three point hand is formed. Following the same logic, if the total of both cards is 14, the hand will have a value of 4 as the amount exceeds 10 and the first digit has to be omitted.

The hand whose first two cards have a value of 8 or 9 is considered to be a ‘natural’, meaning that it automatically wins and therefore, no more cards are dealt. If both the banker and the player have a natural, the hand with the highest value wins.

In case that the value of both naturals is the same, the result is a tie and no one wins.

If neither the player nor the banker have a natural, a third card can be dealt. Usually, the player as well as the banker have the chance to get a third card, however, it is also possible only one of them to take advantage of this option. When it comes to the third-card rule, it is worth mentioning that it can differ from one casino to another. Even though, it is automatically applied, it is highly advisable to get acquainted with it as even the smallest changes of the rules can influence the players’ odds. The maximum cards a particular hand can have is three and the minimum is two.

Baccarat is one of the most exciting card games which is one of the reasons why it can be found in a number of land-based casinos as well as online. It has never been so easy and accessible to enjoy this game and nowadays, players can play it at the comfort of their home and still get just as thrilled as if they were present in a traditional brick and mortar casino. Gamblers all over the world have the chance to get familiar with the moderately easy rules of the game and enjoy it virtually.

This casino game is famous for offering high-limit tables which greatly attract high rollers worldwide. However, nowadays, it is possible to find many variations whose rules are especially designed to suit all types of players, regardless of their bankroll and betting style. What makes Baccarat so enticing is its simple rules, yet completely sufficient to create a highly entertaining game.