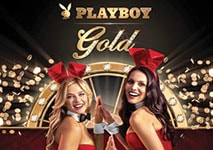 Playboy Gold is one of the newest slot games to be released on the market, making its debut in early March of 2018. This game was developed by Microgaming, one of the leading companies in the creation of online casino software and games and a well-respected industry leader. Microgaming is responsible for some of the most popular games in existence and judging by Playboy Gold, it has not lost its edge.

Playboy Gold is a bit different from other games in the same genre, featuring a 6×10 grid, as well as, 100 unique paylines. The betting limits are also quite extensive, allowing players to wager up to $500 per spin. Up to 50 coins can be wagered per spin, with a value ranging from $0.01 to $1.00. Of course, players may increase the number of coins wager by up to 10 times. This makes Playboy Gold suitable for both casual players and high rollers alike. Playboy Gold pays left to right, meaning that a winning combination will have to start on the leftmost reel and go along one of the paylines. 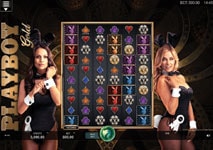 The theme of the game is mostly self-evident since everyone has heard of Playboy by this point. As soon as you open the game, you will notice how the game is centered around the Playboy theme, with the background image portraying two of the famous Playboy bunnies. The background music track is also composed in a fitting fashion.

The symbols on the reels mostly consist of variations of the Playboy logo and some Playboy models. Visually, the game is quite impressive and it clearly shows Microgaming’s proficiency in creating high-quality casino games.

Playboy Gold features a plethora of unique symbols which will adorn the game’s reels every time you spin them. There are basically three types of symbols in Playboy Gold, based on how much each symbol pays and the interactions it has with the general gameplay. The Low Paying category of symbols includes the playing card suits and two poker chips with the Playboy logo. These symbols are mostly basic and there is nothing special about them.

However, the next category – the High Paying symbols – is nothing of the sort. Here, we see four different symbols, named after different Playboy models. Stephanie, Hiromi, Gia and Carly are the High Paying symbols and in their basic form, they are 1×1 symbols portraying the Playboy logo in various colors. These symbols play a special role, but we will discuss this down the line.

The final category includes two symbols – the Wild and the Scatter. The Wild symbol is a Playboy-branded bar of gold and it will substitute for any other symbols on the reels, with the exception of the Scatter. The Scatter symbol, on the other hand, will trigger the Wheel Bonus. 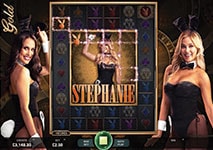 Playboy Gold is fairly light on jackpots, but there are plenty of features for those interested. Jumbo Blocks are one of the most commonly-occurring special features that you will experience in Playboy Gold. On any given spin, there is the possibility for a named symbol to expand in the middle reels and cover 4×6 positions. Each of those will be considered a whole Stephanie, Hiromi, Gia or Carly symbol. Moreover, when this happens the Jumbo Block will also award a winnings multiplier up to 5 times, a cash prize up to 30 times the bet size or up to 4 re-spins.

Respins also have a natural chance to occur. When that happens a Jumbo Block will expand, even more, covering 4×10 positions on the reels. Moreover, the first and sixth reel will respin up to four times and will be covered with Wild symbols or blanks. Any Wild symbols that land during this will remain in place for the duration of the respins.

The Wheel Bonus is activated when you spin 3 or more Scatter symbols at once. This bonus phase will reward you with either a cash prize, a match bonus or free spins. The match bonus mini-game will have you revealing cards and looking for pairs. Each pair comes with a designated prize and after the second pick, the reward increase with each choice up to 10 times. Matching pairs on the second pick will award all cash prizes. Free spins are unlocked using a special symbol during the Wheel Bonus. A round of 10 free games will be unlocked, during which a Jumbo Block will land on the reels on each spin.