Hot as Hades is a fun, cartoon-looking video slot running on the impressive Quickfire software platform by Microgaming. Exploring the underworld realm of Hades with this 5-reel, 20-payline slot game, players have the opportunity to win up to $100,000. With a minimum bet standing at $0.20 and a maximum at $50.00, this game is enjoyed by players of various interests and budgets. 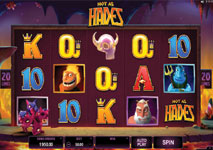 The slot takes us deep into the Ancient Greek mythology and right into the center of the underworld ruled by Hades. As its name suggests, it is hot with fireballs and molten lava, while the player is on a dangerous quest to find the crystal helm of Hades. Playing the slot, you need to stay clear of the flames, as they can stop your quest, and to watch out for the Hades and his cohorts – the deadly Medusa and Cerberus. You will also see the equally dangerous Greek gods Poseidon and Zeus, attacking you with water and lightning bolts, respectively.

Microgaming’s Hot as Hades slot owns a huge portion of its popularity also to the various special symbols and bonus features embedded into the game. The symbols are several playing cards, Poseidon, Medusa, Zeus, and Cerberus, which pay out differently when found. There is also the Hades symbol, which is at the top of the paytable with a prize of $2,500. The Hot as Hades logo, on the other hand, is the wild symbol, which can replace any symbol in the game, except for the scatter symbol. This way, it creates winning combinations that are doubled. Its other function is to form winning combos of its own on active paylines. There is a scatter symbol, as well, and this is the Crystal Skull, which can award players with instant wins of up to 500 times their bet. When three or more are found, they trigger the Quest for the Crystal Helm bonus game. 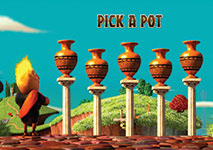 There is a bonus game in Hot as Hades and this is the Super Mode Free Spins round, which may be triggered after any completed spin. It awards the player 5 free spins, where 3 wild symbols are activated randomly. While in free spins, the player has the opportunity to win up 2,000 times their bet, or a maximum jackpot of $100,000.

When two or more Crystal Skull symbols appear, they complete a winning combination. More importantly, when the player finds three or more Crystal Skulls, he or she is awarded a bonus game, called the Quest for the Crystal Helm, which opens in a separate screen. This is a game with 5 levels and a beautiful animation, displaying the player’s quest which goes beyond the underworld. Progressing through the 5 levels, the player can score randoms wins, find Win All symbols, or be stopped by a Block symbol. Of course, this is the most exciting and attractive feature of the slot and although it cannot be activated together with the Super Mode Free Spins round, it can also bring huge winnings to some players.