Based on the Hollywood movie of the same name, Bridesmaids is a 5-reel slot game that features 40 paylines. It is developed by Microgaming, one of the largest online casino software developers in the industry. Microgaming has developed a good deal of slots based on popular films to great success. Such games include Hellboy, Jurassic Park, Terminator 2, etc., and Bridesmaids has the same level of polish and attention to detail.

The minimum coin value that you can assign to a coin is $0.01, with the maximum being $0.10. You can also bet up to 15 coins per individual payline. 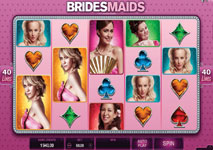 Much like its name implies, this slot game features the characters from the movie and portrays them in the same light. The overall theme is glamorous and girly, with a bright pink color palette and sparkly symbols. The background sound resembles that of a wedding reception. The game remains faithful to the source material and maintains that chick flick feeling to it. Fans of Bridesmaids the movie will certainly like this game adaptation.

The game features symbols taken straight from the movie. The Standard lower-paying symbols take the form of playing card suits, more specifically spades, clubs, hearts, and diamonds. The higher-paying ones are represented by the bridesmaids from the film.

There are also symbols of importance that you should look out for, namely the Wild and Scatter ones. The Wild symbol is represented by the ‘Bridesmaids’ logo from the movie. It can act as a substitute for any missing symbol or make its own combination when you collect 2 or more of them. The Scatter symbol is portrayed by the flowery-looking pink cupcake. 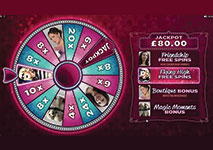 Bridesmaids is somewhat more simplistic than other slots. It does not have a lot of different features, rather most special rewards stem from the Wheel Bonus. This is triggered by hitting 3 Scatter symbols or more. Once it is activated you will have the chance to claim 1 out of 15 prizes. These include cash bonuses, free spins, and multipliers, as well as a jackpot. Hitting the jackpot will award you coins, however, it is not progressive and its value is determined by the amount of Scatter symbols that triggered the Wheel Bonus.

Bridesmaids is not overly complex and you do not need to remember what triggers this and that. Its simplicity, however, does not mean that it does not pay. With this slot, there is the opportunity for a very handsome prize, if you are lucky enough that is. It is a good game for beginners or players who would like to take it easy.