Bringing retro atmosphere with its classic 7s and Bar symbols, Starburst is a famous 5-reel slot from NetEnt which features a total of 10 paylines.

Starburst is a colorful, space-themed slot which has a distinctive, bright graphics, complete with sparkling jewel symbols that remind of the classic Bejeweled arcade game. Running on the NetEnt software platform, the beautifully made slot also features mesmerizing cosmic music and vibrant neons that are, surprisingly, relaxing for most players. 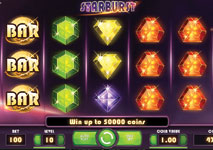 There is not a huge variety of special symbols in Starburst, which may be disappointing at first – no scatter symbols and no multipliers at all. While you are spinning the reels, you can watch the bright gems quickly switching places, but there are two important symbols in the game – the Bar symbol and the 7 symbol. They are, in fact, very lucrative, as is the Starburst wild symbol, which appears on reels 2, 3 and 4 and expands over the reel, triggering a re-spin. The maximum number of re-spins a player can be awarded with is 5. There is also a nice function added to the slot – clicking the Spin button during the round, players can also stop the reels from spinning. While it is not something exclusive, profitable, or particularly important, it gives players the feeling of controlling the game to some level, which makes it even more exciting. 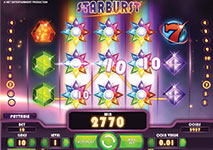 When the Starburst symbol emerges, it triggers the wild feature and remains on the reel, while the other symbols are changing. If the Starburst symbol appears 3 times consecutively, it will trigger even more re-spins. However, there is another exciting feature, which may be almost equally lucrative – this is the Two Ways Win, which means that you can win whether 3 (or more) symbols appear from left to right, or from right to left. It increases your odds of winning by giving you another bonus round.

And thanks to the Two Way Win feature, Starburst is one of the most preferred slots among casino players – unlike other slots, where winning combos are valid only from left to right, winning combinations here are paid both left to right and right to left. With coin values ranging from $0.01 to $1.00, players can bet as little as $0.10 per spin, or hit the maximum bet button with a $1.00 coin and wager $100 at once. While the Starburst slot does not have a progressive jackpot, its winnings can reach up to $50,000, a jackpot huge enough to compare to some of the popular progressives right now. Winning the maximum sum is not so easy – you need to get 3 expanding Starburst wilds, in order to do that. Still, this slot is widely considered as a well-paying game and is among the most played video slots in online casinos right now.