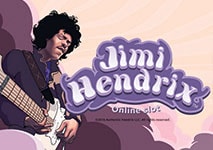 NetEnt has released multiple music-themed slots over the years some of which have become fan favorites, being featured in most prominent online casinos. Games such as Motorhead and Guns N’ Roses have risen to great popularity and now we would like to bring your attention to another title of the same type. The Jimi Hendrix slot pays homage to one of the most influential musicians of all time.

This game features 5 reels and 20 individual paylines. The betting limits are also quite liberal, with a minimum wager of $0.20 and a maximum of $200.00. On each spin, the players wager 20 coins, one on each payline, with the value of the coins ranging between $0.01 and $1.00. Moreover, the number of coins wagered can be increased in increments of 20 up to a maximum of 200. 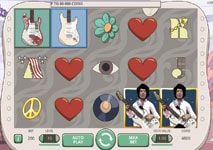 The theme of the game is meant to reflect Jimi’s view of the world. With the world-famous guitarist having lived during the biggest years of the hippie movement, we see these influences directly appearing in the game. The developers have taken an interesting approach when designing the visuals of Jimi Hendrix. Gone are the typical computer generated graphics, replaced by the classic cartoonish style of the slot games of the previous decade.

As soon as you start the game, you will notice the colorful and vibrant graphics lighting up on your screen. The overall style is lighthearted and it will appeal to many different gamblers. On the reels, we see many symbols of the hippie movement, such as the peace sign, hearts, flowers, etc. The background track is also excellent, immersing you fully in the game’s atmosphere.

Jimi Hendrix adorns its reels with a variety of different symbols, which can be classified into two distinct categories. The Low Paying symbols are mostly made up of high cards, ranging from Ten to Ace. As the name of the category suggests, these symbols pay significantly less than the others. The High Paying category features two different guitar symbols and various hippie imagery, such as peace signs, hearts, flowers, eyes, etc.

There is also one more category of symbols, which serve special functions and therefore, stand apart from the rest. One is the Wild symbol, which takes the likeness of Jimi himself. It will stand in for any other symbol when forming a winning combination. It also has its own paytable, but it is the same as the other highest paying symbol in the game, rewarding players with 400x the triggering bet when spinning 5x Wild on an active payline. There is also the Scatter symbol, which is the key to unlocking the Pick and Click mini-game. Finally, we come to the Red Guitar and Purple Haze symbols, each of which unlocks special features, named after each respective symbol, which will cover in the next point. 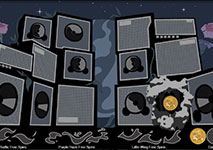 Jimi Hendrix comes packed with a wide array of diverse features, which will make your experience with the game highly enjoyable and memorable. Two such features can be triggered during the main game and these are the Purple Haze and the Red Guitar Re-Spin. The Purple Haze is activated when the Purple Haze symbol lands anywhere on the first reel. When this happens, all high card symbols will immediately transform into Wild symbols for that spin, with the Purple Haze symbol also acting as a Wild.

The Pick and Click feature is a bonus round, which can be activated by spinning 3 Scatters symbols on the third, fourth and fifth reel. When this happens you will be taken to a different screen, where you will get to pick speakers. The speakers will reveal one of four symbols and when the player has collected 3 of the same kind, they will receive the prize associated with that particular symbol. The rewards are cash prizes and free spins with different interactions with Wild symbols.