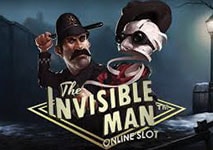 The Invisible Man online slot was inspired by the novel with the same name, written by H.G. Wells. Later on, it inspires one of the most popular horror movies and it gains the attention of many people. The genius gaming developers of NetEnt have also decided to interpret the story of The Invisible Man into this fun 5-reel and 20-paylines online slot.

In addition to the amazing graphics, the intriguing characters and storyline, this online slot can also offer various perks like Free Spins and Bonuses which can make the outcome of every spin a lot more fruitful. If you are looking for a fun way to bet online and win real money, then you should definitely give The Invisible Man a try. The thrilling horror story of Griffin who becomes obsessed with his invisibility researches is the plotline of this online slot. After finding the secret to being invisible, the main character decides that he does not have to abide by any laws and starts creating a series of troubles for the people around him. The graphics of the game are beyond impeccable and the sound effects are so enticing that players are guaranteed to immerse themselves in the creepy adventures of the main character.

The symbols used in this virtual slot illustrate other characters related to the story of Griffin. The background behind the slot reels shows a dark laboratory with flasks that are filled with mysterious liquids that are ready to create the next experimental substance of Griffin. NetEnt has made sure that the slot has the same ominous and mysterious feel that the novel and movie have.

All characters that make the novel and movie intriguing are present in this game, as well. The high-value symbols include Flora Cranley who is Griffin’s fiancee, her father Dr. Cranley as well as the characters of Arthur Kemp, Mr. Hall and Mrs. Hall. For the low-value icons, the game developers have chosen the Ten, Jack, Queen, King and Ace cards. 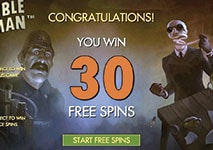 Before you can start your spinning journey at The Invisible Man online slot, you can first adjust your bets. The game has ten different levels which determine the size of your wagers. The number of coins you can place as a bet on the first level is 20, while the tenth level requires a wager of 200 coins. The value of the coins ranges between $0.01 and $0.50. The Max Bet button will allow you to place the highest possible wager with a single click.

During the Free Spins, two meters will appear on both sides of the playscreen. The one that says Bonus Game will correspond to the Griffin Wild symbols that will appear anywhere on the reels. The meter called Police Spins is connected to the Police Wilds that will land on the reels during the Free Spins. Each meter has 8 spaces and when one of the Wild symbols moves off the reels, one space of the corresponding meter gets filled. If one of the meters gets filled before the end of the Free Spins, the corresponding Bonus feature will be triggered at the end of the Free Spins. The first feature is called Police Spins and the second one – Griffin’s Rage Bonus.

During the Police Spins, players will be awarded 3 Free Spins with 5 Burning Wild symbols which are placed at random positions on the reels. For each spin, the 5 Burning Wilds will appear in different places that can ultimately help hitting a winning combination.

The Griffin’s Rage Bonus reveals 3 different locations where the players should choose 3 or 5 items which will reveal various prizes. Among the perks players can pick, there are 3 coin wins which have a different value that will be added to the player’s current coin amount. The next prize is either a x2, x3 or a x4 multiplier and the third item is a Police Hat which is awarded at the end of a stage in the game.

After picking a multiplier, players might choose another item during the Griffin’s Rage Bonus. At the end of the Bonus round, all of the coins that were collected during the Bonus Game will be multiplied by the number of the multiplier they have picked. The Invisible Man is definitely an online slot which is exciting, fun and rewarding at the same time.