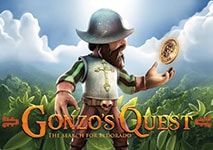 Gonzo’s Quest is a 3D video slot game that takes you on an adventure to the legendary city of El Dorado. Gonzo is your companion who stays on the left of the base game screen and dances or moves around when you are winning, which adds to the dynamics of the game. This is one of Net Entertainment’s 2010 releases but the opening sequence is beautiful and the graphics are top-shelf. It is a 5-reel, 10-payline machine with a bet range of €0.20 up to €50 where similar symbols self-destruct and make room for new ones.

The symbols in the game do not act like those in normal slots where the reels spin but instead the blocks fall from the sky, which is called the Avalanche Effect. It was one of the first games with this effect and players loved it so much that it was implemented in a great number of games to follow. The multiplier featured here was also innovative for its time and its presence in this game led to its broader use nowadays. 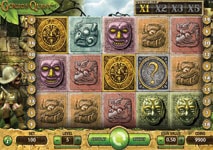 The opening sequence itself takes you through the Aztec pyramids and flora, leading you to a hidden city. The atmosphere is that of the South African wilderness in the jungles, with exotic sounds and detailed engravings all over the game’s setting. In the background stand the ruins of an Aztec pyramid with a beautiful animated waterfall and a few signs of the jungle itself.

This is all based, of course, on the story of El Dorado, the lost golden city that attracted the attention of many adventurers after the 16th century. The legend still lives today and invokes excitement and wanderlust in many.

The symbols in this game are all in touch with the atmosphere, providing a further immersive environment which enhances the player’s experience. The symbols here are stone blocks with carvings derived from South American cultures in different colors, with the exception of one – the golden block.

With that exception in mind, the colors are blue, light blue, red, green, purple and orange, all faded, which gives them the feel of something ancient and grand. The engraved features are actually the faces of Aztec gods and therefore their value depends on the importance of the god they represent. The way these work is that if you get a combo you win, first win gets you x1 multiplier, then on the next one you go up to x2 and so on until you reach the limit of x5.

The Golden Block is, as you may have already guessed, the best one you can get. It is a free fall block and if you get three of them, you unlock a bonus game with 10 additional spins.

The game also contains a wild symbol with a question mark on it. Its function is the typical one – there are no surprises there, but it is still a profitable addition. 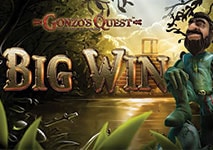 Now, the combos in this game are not as simple as those in basic games, because the matching pattern varies and it’s not as easy as getting the same few blocks on one line – there are multiple intricate patterns. Once you get a win in one round the multiplier goes up and with each subsequent win, it continues to increase, then gets back down to 1 once all the winning combinations of the round have been exhausted. If you hit 5 identical blocks in a line you get a special tribal sound effect and bonus payout.

The jackpot is struck when you get three golden blocks on the same payline and coins start raining from the sky. Gonzo moves to the middle of the screen to collect them in his helmet, joyous at the event. The wins are multiplied and you can get additional free spins.

The multipliers in the free fall round are bigger and reach up to x15 which is absolutely amazing and gives you a great chance at increasing your win.

In conclusion, Gonzo’s Quest is a fun game with great features and a beautiful design. It is definitely worth a look and you can try it for free, which will allow you to test it for yourself and decide whether it is the right game for you. But in our opinion – Gonzo’s Quest is a real gold mine!