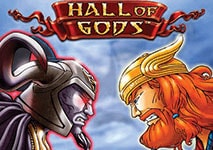 NetEnt lifted the lid on their mythology-inspired creation, Hall of Gods, in December 2010, but this 5-reel slot with 20 fixed paylines continues to enjoy an immense popularity among reel spinners to this day. This is anything but surprising – a world-class game with an enormous progressive jackpot never gets old.

To boot, Hall of Gods is equipped with plenty of great features to keep you entertained for hours on end. There is the bonus game which leads to the progressive prize, an expanding wild symbol, and a lucrative round of free spins, activated by the scattered symbols. What more could one want from an advanced slot? 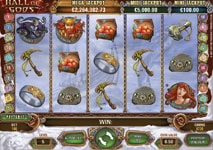 The acclaimed software supplier NetEnt drew much of its inspiration for its Hall of God offering from Norse mythology. While spinning the five reels of this enticing slot, players will encounter the mighty Odin who rules over Asgard, his son and god of thunder Thor, the mischievous Loki, the goddess of youth Idun, and Freya, goddess of fertility and beauty.

The five reels are positioned on top of what appears to be the ocean surrounding Misgard. The graphics are so detailed that one can even spot the Misgard Serpent in the background. All symbols on the reels are elaborately decorated with the scrolls and knots on what seems to be a dragon-ship, in line with the mythological theme of the slot.

What further enhances one’s playing experience are the dramatic sound effects. You spin the reels to the sounds of mighty music which culminates in a triumphant tune whenever one hits a winning combination on a payline.

The software developers over at NetEnt have spared no efforts in crafting a truly impressive and playable game that is easy on the eye thanks to its crisp and detailed symbols and animations. It makes sense that the highest-value symbols are reserved for the five Nordic gods – Idun, Loki, Freya, Thor, and Odin, who rightfully is the top payer in the game and awards 4,000 coins for five matches.

NetEnt developers have decided to stray off the beaten path this time around and have ditched the boring card initials for the low-value combinations. The smaller prizes in Hall of Gods are awarded by various thematic symbols containing Idun’s chest of apples, an ax, an elaborate necklace on a stone, and of course, Thor’s famed hammer.

Additionally, three special symbols are incorporated into the game, starting with the wild Misgard Serpent, which substitutes all other symbols except for the scatter and the bonus ones. The bonus symbol is represented by Thor’s hammer and triggers the bonus game in Hall of Gods. Last but definitely not least, there is the scatter with Odin’s faithful ravens, Huginn and Muninn, which hold the key to unlocking the free spins round. 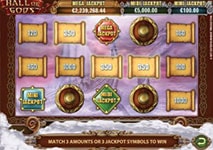 Hall of Gods is a beautifully crafted video slot but this is hardly its only attraction. The game boasts a huge winning potential as one can collect up to 20,000 coins in the base game, provided that five Odin symbols land on a payline and you bet the maximum, which is 5 coins per spin in this instance.

But this is hardly all as the game features an expanding serpent wild which is special in that it stretches to cover an entire reel whenever it lands on reels 2, 3 or 4. Naturally this significantly increases one’s odds of completing a winning combination.

The scattered ravens are just as lucrative, if not even more. They can appear anywhere on the reels during the base game and you need a minimum of three scatters to trigger 10 free spins. Those who hit 4 or 5 scatters are rewarded with 15 and 20 free spins, respectively. But it gets better since all winnings generated during the free spins are tripled by a 3x multiplier. Moreover, one can activate more free spins by landing the same combination of scatters during the feature.

The majority of the shields hide guaranteed monetary prizes ranging from 100 to 1,000 coins. The Mini, Midi, and Mega Jackpots also lay hidden behind the shields. Needless to say, it is the Mega Jackpot that all reel spinners are craving since it normally reaches seven-figure amounts. In order to win a coin prize or a pot, you need to match three amounts (or three jackpot symbols, respectively). It is important to point out that the odds of hitting the jackpot correlate to the pot’s current size and the size of one’s bets, which is to say one has bigger chances of becoming a millionaire when playing the maximum stake per spin.

Speaking of stakes, you can bet up to five coins per round, with denominations ranging from $0.01 to $0.50. The minimum amount you can risk stands at $0.20 while the upper ceiling is set to $50.00. Hall of Gods is a great alternative for all reel spinners from the low and middle betting spectrum, looking for a well-designed game that is loaded with extra features. The huge progressive jackpot increases the slot’s value even further.