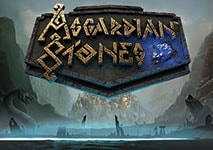 If you are interested in mythology, you will definitely find this game quite appealing. Asgardian Stones plays out on 5 reels, 3 rows and features 20 fixed paylines. The reels hover over a water surface and in the back, there is a rocky view.

At first, you may find the game a little bit grim or creepy but once you start playing, you will undoubtedly see that it offers a compelling and thrilling experience. 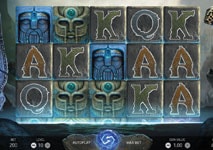 Asgardian Stones is inspired by Norse mythology and more specifically by Asgard which is one of its nine worlds. Asgard is a home to Gods and Goddesses. In Asgardian Stones, some of the symbols feature stone-carved faces of Nordic divinities. The game is set in something similar to a cave, over a water surface and incorporates items and characters that can be found in the Nordic worlds. The intriguing and exciting gameplay, as well as the suspense, will definitely impress slot fans.

What is more, players can take advantage of the game’s various additional features that further increase their chances of winning, thus making the game even more appealing. Players are also given the opportunity to set the coin value which ranges from 0.01 and 1.00. Additionally, there is a button “Autoplay” that enables them to play the game multiple times without interruption.

The game offers a wide array of theme-related symbols. The high-value symbols are a representation of gods, whereas the ancient signs A, Q, and K represent the low-paying symbols. In addition to this, there is also a wild symbol that can substitute all other symbols with the exception of the bonus wheel.

All symbols in the game, with the exception of the Wild symbol, have a colossal variation. The colossal symbol is a block of either 2×2 or 3×3 symbols. These symbols can assist you in forming winning combinations and can also trigger the Colossal Crush feature. Still, you cannot have more than one colossal symbol at the same time. They can be either completely or to a limited extent presented depending on the way the reel appears. Yet, when a symbol is part of a winning combination, it explodes and disappears, even when only a small part of it was included in the winning combination. 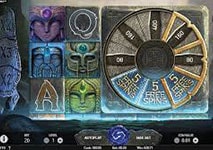 Asgardian Stones offers various additional features that can help you increase your profit. One such feature is the Colossal Crush. In can be activated after the first “Avalanche” both in the main game as well as in the free spins. The colossal symbol must always have other symbols in all the positions that are beneath it. The symbol falls crushing all the symbols on the row beneath it. This carries on with until it reaches the bottom or until there are no more empty positions beneath it. For each crushed row, you are awarded a multiplier that increases its value by x1 with each drop, up to a maximum of x4. When the colossal symbol reaches the bottom, the wins are evaluated by adding the multiplier’s value.

The Bonus Wheel feature can also generate some good profit. This is a symbol block of 3×3 slot symbols that can appear on the final 3 reels only, both in the main game as well as in the free spins. It can be fully or partially visible. The bonus wheel spins and a maximum of three of its segments can be highlighted. The number of the coin wins or the number of the free spins you have won will be equal to the number of rows the symbol covers. This means that you get an additional prize for each row. Still, the bonus wheel is not dismissed after you get your prize which means there is no avalanche after its assesment. The coin win from the bonus wheel can be 1, 2 or 5 times the total bet. The maximum coin win here is 36 times the total bet.

There are three sectors from the bonus wheel that give you 5 free spins. This means that eventually, you can win up to 15 free spins. They are played on the same bet level and coin value as in the round in which they were activated. Here, the wild symbol may be a colossal wild symbol. If such a symbol is part of the winning combination, it is split into 1×1 wild symbols. Wild symbols that are part of the winning combination explode and disappear. Yet, if they are not part of a win, they remain on the reels and become part of the next avalanche. The bonus wheel cannot be reactivated more than three times in a free spin session which means you can win a maximum 25 additional free spins.