It has a very user-friendly interface, with all the features thoroughly explained, and has a wonderful autoplay feature. It also features a wonderful Tiki pole companion who reacts when you win. If you want to take a break from your mundane life, this is definitely the game for you! 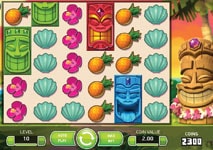 The setting is Hawaiian, so the player finds themselves surrounded by beautiful tropical flowers, Tikis and palm trees. The background is actually a beach on an island with a volcano in the far end. The music is very relaxing and the whole gameplay makes you feel like you are on a holiday.

The Tiki pole companion claps when you get to a Sticky Win Re-Spin, then when you hit a Big Win, he puts on a pair of sunglasses as the background turns red and the volcano erupts, which gives the game a sort of an epic feel. He starts hula dancing when you win Free Re-Spins, then starts playing a ukulele while they last.

The animation itself is quite gorgeous and cheerful – it is filled with bright colors, which evoke memories of the summertime. It is very fun and pretty good for its release date. Of course, it is not the most notable thing in this game as its incredible features are just so much more captivating.

The low-value symbols in the game are a hibiscus flower, a sea shell, a coconut and a pineapple. With all of them the wins are the same, the lowest being 5 coins and the maximum being 2,000 coins. They have a special feature which we will get to in the next section.

The high value symbols, on the other hand, are only three and are all Tiki totems – a blue one, a green one and a red one. Each of them has gem stones on the forehead. The blue and green ones both offer the same maximum win, which is 5,000 coins. The red one, however, offers a win of 10,000 coins.

The wild symbol in this game is like a wooden box with a question sign on it. The free spin symbols are like stamps from Hawaii and, as with most games of the sort, you need at least 3 of them. If you get 6 of them, you win 12 free spins. If you get the same number during a free re-spin, though, you win only 4. 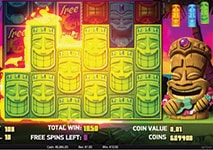 The free spins have a Symbol Drop mechanic, where the least paying symbols literally drop out to give you the odds of a better win. Not only that, but also if there is no win on a free spin, you get an extra one until you win.

A very interesting feature is the Sticky Win Re-Spin and what it does is it keeps the winning symbols on the screen while the rest keep spinning. This is activated by a cluster of the same symbol and the more you get during the re-spins, the bigger your win gets.

So now, let us get to the most important feature of the game – the Cluster Pay. Here, we do not have the traditional paylines but instead the symbols need to form a cluster in order for the player to win. For that, you need 9 or more of the same symbol. In addition, the slot is equipped with the Autoplay feature which allows you to go through up to 1,000 rounds uninterrupted and without clicking the spin button.

The Jackpots in this game are won during the Sticky Win Re-Spin and are multiplied greatly. You can have Big Wins and Super Mega Wins. The maximum win is €200,000.

So, in conclusion, playing this game leaves you relaxed almost as if you have just gone to a spa and had a massage, but instead of paying for this great pleasure, you make profit.