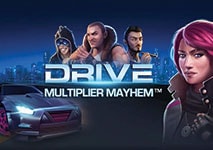 Drive: Multiplier Mayhem is the perfect choice for reel spinners who are interested in muscle cars and a fast-paced gameplay. The game comes straight from the collection of renowned developer NetEnt and was first introduced to slot mavens at the beginning of 2016. Being a relatively new slot, Drive: Multiplier Mayhem commands the attention with a variety of interesting features and a unique design that helps spinners collect even more massive prizes.

The game plays over 5 reels, 3 rows, and 15 fixed paylines. One’s chances of earning a payout are significantly boosted by the multiplier wild symbols, but the slot also features a round of free spins and scatters for more wins. Other than that, the betting limits are flexible enough for anyone to try this bespoke NetEnt creation. Betting starts at $0.15 only, with a maximum of $75.00 per spin and the option to stake between 1 and 10 coins on each round. 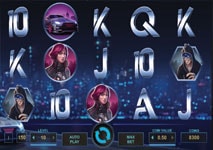 So, what can one expect from a slot called Drive: Multiplier Mayhem? The answer is quite simple – lots of action that will make your heart pump with excitement and plenty of multipliers to help you score larger wins. One glance at the slot will suffice to give you an idea what this game is all about. Drive: Multiplier Mayhem has obviously been inspired by popular flicks like the Fast and Furious series, with a pinch of a Need-for-Speed influence.

The reels are set against a dark blue backdrop which depicts a large metropolis with lights glittering vaguely in the distance. In the lower left corner, there is a muscle car, similar to those we all have seen in the Fast and Furious series. The symbols are masterfully crafted in line with the overall style of the game.

Everything is polished down to the tiniest of details but this is nothing new considering the game comes straight from the portfolio of leading developer NetEnt. The slot plays very smoothly but one’s experience is improved by the artful animations and the crystal clear graphics. The awesome sound effects and great background music further add to the excitement.

NetEnt developers have included precisely the type of symbols one would expect to see in a game called Drive: Multiplier Mayhem. There is the highest payer in the slot, represented by a pink-haired female driver called Jette, who also appears to be the main protagonist here. Jette is joined on the reels by a group of male drivers, Bruiser, Twitch and Hamaki, whom she races against. These four characters are in fact the most lucrative symbols you can hit on the reels, with the highest prize of 150 coins going to the player who lands five matching Jette symbols on a payline.

The low payers are once again represented by the initials of high-playing cards A, K, Q, J, and 10 but are made to look as if they are crafted out of metal to fit the overall theme of the slot. All of these offer the same payouts, earning players a minimum of 5 credits for three matches and a maximum of 30 credits for five matching symbols.

Additionally, there are wilds which can substitute other symbols for a higher number of winning combinations. To boot, the wild symbol multiplies one’s winnings. No slot is complete without a scatter and this one is not an exception as this symbol helps you get to the free spins round in Drive: Multiplier Mayhem. Since this is a multi-level game, the developers have added one extra Nitro symbol which helps you transition from one level to the next. 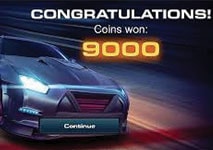 Drive: Multiplier Mayhem may lack a bonus mini game but this can hardly be considered a disadvantage since the game is loaded with other cool features. To begin with, there is a round of free spins activated whenever the player lands 3 scatters on reels 2, 3 and 4. During the free spins, the special Nitro symbol can appear in any position on the above reels to award more bonus rounds. One’s chances of success during the free spins are further improved by the random appearance of the multiplier wild.

But there is more to this innovative slot than free spins. The Nitro symbols give players more bonus rounds and multiplier wilds. There is a Nitro Meter on top of the base-game screen where you can keep track of your Nitro symbols.

As was explained earlier, the game has several free-spin levels you can progress through. When you first activate the bonus round with three scatters, you start by racing the character Twitch. Collecting 3 Nitro symbols enables you to progress to the next level where you receive 4 more free spins, and race against Hamaki, your next opponent.

The third level gives you 3 additional bonus spins while you compete against Bruiser. And finally, when you fill up your Nitro Meter, you reach the fourth and final level where you can face Bruiser again and receive 2 extra free spins. The multipliers attached to the wild symbols are dynamic and can reach up to 20x the amount won. The size of the multiplier also depends on which reel the wilds land on.

Drive: Multiplier Mayhem may indeed appear like “mayhem”, especially if one is inexperienced. Yet, the game definitely deserves to be given a try for a number of reasons – the graphics are superb, variance is low to medium, and let us not forget the fixed jackpot of 750,000 coins that awaits lucky players.