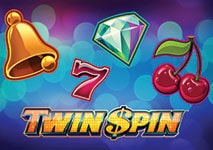 NetEnt brings back the old-school classics into the modern age with its TwinSpin slot. This game will have you longing for the days of old and will allow you to experience the full glory of fruit machines, but with a modern twist. TwinSpin features 5 reels and includes the 243-ways-to-win system, which does away with traditional paylines and provides players with a more flexible way to make winning combinations.

TwinSpin comes with a wide range of betting limits, appealing to high rollers, casual players and anything in between. The minimum bet is $0.25, but that can go as high as $125 if you wish to take large risks. Players are able to change the value of the coins, which range from $0.01 to $0.50, as well as, the level of the bet from 1 to 10. 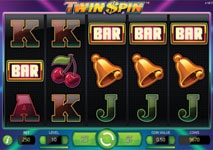 The theme of TwinSpin is clear and easily recognizable. The game tries to emulate the feel of classical fruit machines but it also adds modern game mechanics to form an interesting and engaging title. From the get-go, players will notice the old-school style in the imagery of the symbols, which portray bells, cherries, sevens and so on. However, TwinSpin does not rely on the classic theme alone.

As soon as you start the game, you will notice that the graphics are up to par with modern standards and can rival any other slot on the Internet. The animations are buttery smooth and are a pleasure to look at. With clear-cut visuals and a memorable background track, TwinSpin makes an excellent first impression and it is hard to imagine that anyone would have problems with the game’s presentation.

As far as symbols are concerned, TwinSpin does not go overboard, preferring to only include a few classic symbols that every gambler is familiar with. They are sorted into two categories depending on their payouts. The Low Paying Symbols feature the traditional high cards, ranging from Nine to Ace. The High Paying Symbols portray images commonly found in the old fruit machines, such as the cherry, the bell, the BAR symbol, the seven and the diamond.

Additionally, there is one Special symbol that no slot game will dare to go without. Of course, this is the Wild symbol, which can serve as a substitute for all other symbols on the reels. It will help you to finish incomplete combinations and an overall boost to your bankroll. The Wild symbol does not pay anything by itself, which is a letdown, but it can still have an immense impact on the game. 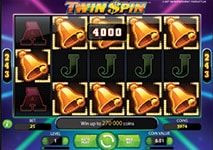 Regarding winning combinations, you will find that TwinSpin functions much like any other slot game. Basically, you will be asked to line up three or more of the same symbol on the reels. The game pays from left to right, which means that the combination will have to start on the leftmost reel and progress on the neighbouring ones. Since TwinSpin uses the 243-ways-to-win system in place of classic paylines, the game will count any combination for a winning one, as long as the same symbol is found on three or more neighbouring reels, regardless of their actual positions on the reels.

There is no progressive jackpot associated with Twin Spin, only the high rewards when you spin enough symbols. This is par the course with games of this kind and it is something that we have come to expect. However, there is one feature that makes up for the lack of jackpots and the name of the game derives from it. The Twin Reel Feature has a huge effect on how the game plays and it results in some very large wins. Basically, on each individual spin, two adjacent reels will be linked together and become identical copies of each other.

The number of linked reels is not limited to two, however, and when you play enough spins you will notice that the game will occasionally link three, four, and even five reels together. As you can imagine, this feature has the potential to score you massive wins and when the reels align just right, you will see what we mean.