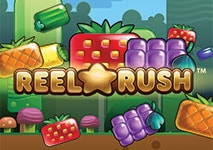 Released in 2013, Reel Rush serves as yet another proof for the ingenuity of the software experts over at NetEnt. This is a 5-reel slot which promises plenty of entertainment and 3,125 ways to win. Do not be fooled by the fruity symbols appearing on the screen, Reel Rush is anything but your ordinary fruit slot and immediately grabs the attention with its unconventional reel configuration.

It is precisely this innovative structure that allows the slot to render even more winning combinations to the benefit of enthusiastic spinners. Apart from its original design, Reel Rush offers a bevy of other interesting features, including wilds, free spins, and re-spins. The slot is suitable for all players since it comes with numerous betting options. Players can stake up to 10 coins per spin, with denomination between $0.01 and $0.20. The minimum and maximum limits per spin are set to $0.50 and $100.00. 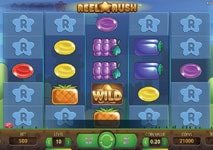 It appears NetEnt developers were attempting to meet the needs of both traditionalists who prefer classic slots and players who insist on a more dynamic gameplay and special features. Reel Rush poses as the perfect combination of a classic fruit machine and advanced slots, offering multiple ways to win.

In terms of theme, the game obviously has been inspired by the one-arm bandits of days bygone since all high-paying symbols are represented by fruits like pineapples, plums, strawberries, lemons, grapes, and kiwis. These are not your ordinary fruits, however, since the symbols are styled in such a manner so as to resemble lollipops.

There are five reels but the symbols initially rotate only within the middle grids of the screen. The more matches you hit in a row, the more grids are added to the reels for the symbols to spin and form winning combos in. But more on this later.

The slot is partially made to resemble the popular free-to-play game Candy Crush, which is impossible not to notice. The style of the symbols is rather cartoonish and the screen explodes with color from the very moment Reel Rush loads. The backdrop behind the reels is rather psychedelic, with the symbol grids positioned on top of a rather weird-looking forest consisting of… lollipop trees. The fun, upbeat background music is uplifting and will improve not only your gameplay but your mood as well.

As we previously mentioned, NetEnt developers have opted for the traditional fruit-inspired symbols for the high-paying combinations but these are styled in such a manner so as to look like fruity lollipops. So basically, we have strawberries, pineapples, lemons, kiwis, grapes, and plums, ranking the lowest in terms of payout. Other than that, the strawberry is the highest payer and returns 1,000 credits for five identical symbols.

The low-value symbols are represented by suckers candy in different, yet equally vibrant colors like yellow, red, green, orange, and purple. All of these return the same number of coins for five matches so it matters not whether you have five red or five purple suckers, you still win 50 coins.

Let us not forget about the wild symbols, which in Reel Rush contain a gold star and are powerful enough to replace all other fruit and candy symbols within the main game or during the free spins round. 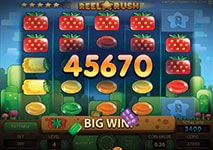 Reel Rush is not your typical video slot since it does not contain any paylines but incorporates the 3,125 ways-to-win format which is even more beneficial to players. What this means is one does not have to keep their fingers crossed hoping for the matching symbols to align on a payline. Payouts are awarded for landing identical icons in any position but on neighboring reels. This makes it much easier to complete winning combinations because the regular symbols practically work like scatters.

It should be noted, though, that the matching symbols need to align in any position but from left to right in order to render a payout. Players receive a prize only for the longest combination per symbol. The game features a wild symbol which works only on reels 2, 3, 4, and 5.

One of the most interesting peculiarities of Reel Rush are the re-spins – whenever you form a winning combination (which usually happens with the help of a wild), the reels will re-spin at no charge with more grids added for the re-spin. Each subsequent win to follow gives you yet another re-spin and the number of ways to win increases. Thus, you start with 135 ways to win on the first re-spin and if you are lucky enough to get five consecutive wins, you get 1,875 ways to win for the fifth re-spin. You can get a maximum of 5 re-spins at which point a round of 8 free spins is activated. This plays with the maximum of 3,125 ways to win.

This is an interesting take on classic fruit machines and a must-try for any reel spinner out there. Reel Rush has everything needed for an entertaining betting session, namely great graphics, innovative design, special symbols, free spins, and a decent return-to-players percentage of 97.00%. Oh, we forgot! You can win a fixed jackpot of up to 480,000 coins, so do not hesitate to try this original NetEnt creation.