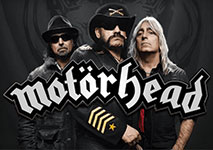 NetEnt is quite fond of music-themed slots, as made evident by titles such as Jimi Hendrix and Guns N’ Roses. Motorhead is another game in the same style, featuring the world-famous Motorhead band. This slot game comes with 76 individual paylines, offering players the opportunity to form many more winning combinations than the average slot.

Additionally, Motorhead allows for a wide range of betting limits, with minimum bet starting at $0.20 and going up to $200, thereby making the game suitable for any budget. Players wager a minimum of 20 coins per spin, but the number of coins can be increased in increments of 20. The coins can have an assigned value between $0.01 and $1.00. 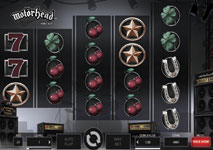 As soon as you start the game, you will immediately notice the distinct rock’n’roll theme with the Motorhead band serving as the main focus of the game. The game is designed to capture the feeling of a Motorhead concert in every aspect. The graphics portray the typical Motorhead fashion and this is also reflected in the symbols and menus of the game. The background image is that of an empty concert stage, with all the band members’ instruments on display.

The background music is where this slot game really shines. Once you start spinning the reels, you will immediately be treated to some of the band’s greatest hits, such as “Ace of Spades”, “Killed by Death”, “Iron Fist”, and “Overkill”. Fans of the band will instantly be drawn in from the music alone and be further immersed in the excellent gameplay.

Keeping in line with the theme of the game, the symbols featured on the reels also portray various aspects of the Motorhead band. Generally, we can categorize them into three different groups, based on the how much they pay and what interactions they can have in the game. The Low Paying Group consists of three symbols – the horseshoe, the cherry and the four-leaf clover. Following that, we come to the High Paying Group, where we find the seven, the bell, the start and the Lemmy symbol. These symbols pay significantly higher than the others and the Lemmy symbol can form combinations starting from 2 symbols, whereas all other require 3 or more.

Finally, we come to the Special category where we have the Wild and Scatter. The Wild symbol takes the form of the Ace of Spades and will substitute for any other symbol on the paylines, with the exception of the Scatter. The Scatter, on the other hand, will give players the opportunity to win a number of free spins when enough Scatters land on the reels. Neither the Wild nor the Scatter, come with their own individual pay tables, meaning that you will not be rewarded for spinning a number of them. This is disappointing and it is sad to see this becoming a trend of modern slot games. 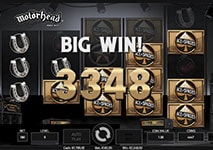 Motorhead does not come with any progressive jackpots, other than hitting five of any High Paying Symbol. Instead, those looking for big wins can always rely on the special features found in the game. One such is the Mystery Reel Feature, which is present on every spin, so long as the Bomber Feature is not active. When you spin the reels, the game will place Mystery Symbols at random. When the reels stop and there are still Mystery Symbols on the reels, the game will transform those into random symbols. This can apply to whole reels, as well.

Of course, no slot game would be worth its salt if it did not include some form of free spins feature. Luckily, NetEnt has thought ahead and players have the opportunity to win 10 free spins. This is done when you spin 3 or more Scatter symbols anywhere on the third, fourth and fifth reel simultaneously. During the free spins round, the Mystery Reels is made up of Mystery Symbols and Wild symbols.