Planet of the Apes Slot 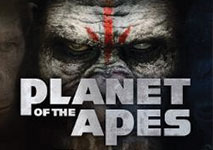 All fans of movie-themed slots can test their luck on NetEnt’s Planet of the Apps which is inspired by the blockbuster with the same name. To be more accurate the online slot is actually based on two movies of the series: Rise of the Planet of the Apes and Dawn of the Planet of the Apes. This 5-reel and 40-paylines slot can provide players with an enjoyable gameplay and a lot of rewarding bonuses that can change the outcome of every spin.

If you are a fan of the movies, you will definitely find this online slot entertaining. It offers players the chance to play on the Rise side and the Dawn side of the slot. In addition to this fun feature, there are also Wild symbols, Stacked Wilds and Scatters that can trigger different Bonus rounds that can make your game more fruitful than ever. 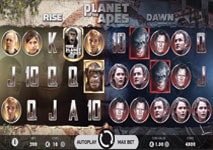 Since Planet of the Apes has become such a huge name in the movie industry, it has sparked a lot of media attention and nowadays people can be overwhelmed by the franchise’s merchandise which is sold everywhere. It was a matter of time before the online gaming industry hops on the trend and starts creating games inspired by the blockbuster.

It can be seen that the online slot Planet of the Apes has incorporated different parts of the movie in its gameplay. The symbols on the reels and the background are so realistic that you can easily forget that you are not watching the real movie. As usual, NetEnt knows how to provide gaming products with a superior quality of both visual and sound effects. This online slot is yet another example of the impeccable work of the software company.

Since this game has combined two different slots, each with 5 reels, there are plenty of symbols that represent the high-value options and the low-value combinations of both the Rise and the Dawn play areas. The Ceaser’s attic window is the Wild that can replace any other symbol, with the exception of the scatter and the Bonus icon. The difference between the two Wilds of both sides of the slot is that the Rise Wild is with a golden colour, while the Dawn Wild is red.

The Rise and Dawn Scatter symbols are both with apes and the logo of Planet of the Apes. Three or more Scatters anywhere on the reels of the slot will bring players a rewarding payout. However, it should be noted that the Rise Scatter and the Dawn Scatter can be beneficial only for their corresponding side of the slot. There are also Rise Bonus symbol and Dawn Bonus symbol that can trigger bonus features that present players with bountiful payouts. 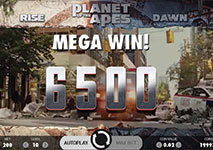 Before every spin, there is a chance that the Dual feature of the game is triggered. This means that a single symbol can be chosen only for the Rise area or the Dawn area. The Wilds and Scatters cannot be chosen for both areas, as well. When the Dual feature has been activated, the symbols that correlate to the right area stick. However, those that do appear on the wrong side are transferred to the play area where they could form a winning combination.

If the Rise Bonus symbol emerges on the reel 1, this will trigger a bonus which will add a coin prize for every ape and human displayed on the featured Rise reels. This, however, does not include the Scatter symbol. The amount of coins that you have won during the Bonus round will be added to the bet line wins you have gathered during the Bonus Game.

If the Dawn Bonus symbol appears on the final reel of the Dawn area, this will transform all the humans and apes into a duplicate symbol. This feature appears only in the Dawn area of the playscreen.

Planet of the Apes has also incorporated the feature of stacked Wilds in its gameplay. When Rise Wilds fully cover an entire reel in the Rise area, the stacked Wilds duplicate on the corresponding reel in the Dawn play area.

The Rise Free Spins are triggered when at least 3 Rise Scatters appear on the reels in the corresponding play area. This will award players 10 Free Spins, during which all Wilds that appear on the reels are collected and at the final Free Spin the number of Wilds you have gathered is spread randomly around the reels.

On the other side of the slot, three or more Dawn Scatters will award players with 15 Free Spins. During the Dawn Free Spins, there are three meters that get filled when a corresponding symbol lands on the reels. When one of the meters gets full, it will trigger the feature that it represents. The three meters are Multiplier, Extra Wild and Extra Free Spins.

The fact that Planet of the Apes utilizes two different play areas gives players better opportunities of hitting massive payouts. Combining the symbols of both the Rise and the Dawn play area can make the game exciting and very fruitful at the same time.