Developed by Playtech and released in 2014, Jackpot Giant is a popular online progressive slot. It features 5 reels and 50 paylines, with a minimum bet of $0.01 per payline, reaching up to a maximum of $0.08 per payline.

In other words, to play at maximum odds you have to bet $4. Jackpot Giant has gained a dedicated following over the years and is currently one of the most played slots on the Internet. The large player base directly contributes to the high jackpot that the game offers. Recently, in January 2016 a UK librarian won the Giant Jackpot of €5.89 million (or $6.7 million). 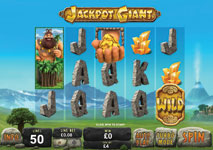 The game features a light-hearted and cartoony Stone Age theme. We see a beautiful mountain landscape in the background. The interface buttons resemble boulders, while the high card symbols seem to be carved out of giant rocks. The background music is a cheerful drumming, reinforcing the prehistoric feeling. The Giant himself appears from time to time on your screen if you have been inactive for a while. Overall, the game is very relaxing and does not take itself too seriously.

There are three major symbols that you should look out for – Scatter, Bonus, and Wild. The Scatter symbol is represented by a handful of golden coins. Getting 3 or more of this symbol on a single payline will multiply your winnings depending on the number of Scatters. A golden plate with the word ‘WILD’ stands for the Wild symbol and can serve as a substitute for any missing symbols with the exception of Bonus and Scatter. A volcano image is the Bonus symbol and landing these on reels 1 and 5 will trigger the Bonus Round.

There are two sets of standard symbols, higher and lower paying ones. The lower-paying are your typical high-card symbols, the Jacks, Queens, Kings, and Aces. These are carved out of large rocks and combining 3 or more of the same kind will trigger a reward. The higher value symbols are in the form of unrefined chunks of precious gems, and naturally, pay more when you hit a certain combination of them. 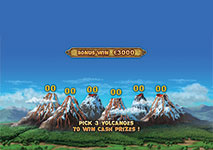 There are several combinations that will definitely interest you. The Bonus Round is triggered by getting Bonus symbols on reels 1 and 5. This will take you to a new screen with the Giant standing behind 6 volcanos. You will have to pick 3 of them, each will award you with prizes. After picking a volcano the Giant will flip a coin revealing your reward.

The Giant Jackpot can only be won by playing with real money at the maximum bet of $4. You can win this massive payout by lining up 5 Wild symbols on the first payline.