Age of the Gods Slot

Age of the Gods is a spectacular, 5-reel, 25-payline video slot by Playtech, inspired by the Ancient Greek mythology. This is the flagship game of the popular series and has an attractive progressive jackpot that makes spinning the reels even more intriguing and appealing to all kinds of players. Based on the Greek Pantheon, the symbols of the slot include Athena, Hercules, Poseidon and Zeus, while the bets per line range from $0.01 to $25, or from $0.25 to $625 per spin. 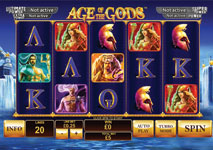 With fantastic graphics and beautiful deities as its main characters, Age of the Gods is visually stunning and very popular among players. Its theme revolves around the Ancient Greek myths, gods and demigods and the story takes the player back in time when heroes bravely plunged into epic adventures and fought archaic beasts and monsters. Along with the major characters, the slot also features Hades, the ruler of the underworld, as well as Aphrodite, the goddess of love, beauty, and pleasure.

All the above-mentioned gods and demigods are the main symbols in the slot, with Athena having the highest value in the paytable – when appearing at least 3 times, her symbol awards the player up to 1,000 times the amount of the bet. At the other end of the spectrum, three playing card symbols, Q, K, and A, can award you from 12 to 150 times the amount of your bet. In between them and the gods’ symbols, you can also find the Helmet symbol which can multiply your winnings by up to 250 times.

Age of the Gods also features an exciting wild symbol, which represents a laurel wreath and has the potential to multiply your line bet by 10,000 times. With this symbol, the winnings just in the base game can reach a whopping $250,000, even without triggering any of the bonus rounds. Speaking of bonus rounds, they can be activated by finding three or more scatter symbols in the form of the Age of the Gods logo. Also, when at least three scatter symbols emerge, they can pay total bet prizes worth 3, 10, or 100 times for 3, 4, or 5 symbols respectively. 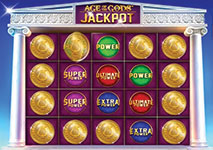 The bonus game is triggered by finding three or more scatter Age of the Gods logo symbols and it opens in a new game screen. The player then is presented with 20 bronze coins which, when turned, may have a Greek god on their backs. The aim is to match up three of the same characters (Athena, Poseidon, Zeus or Hercules) and in this case, the player receives a round of 9 free spins, where different multipliers, features and special symbols can hugely boost the winnings.