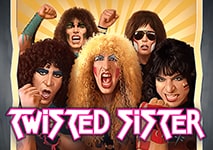 Twisted Sister is a video slot produced by the high-end software company Play’n GO. The game was released in June 2020 and it aims at attracting reel spinners who enthuse over the American heavy metal band Twisted Sister. It is not the first time we see a software company that is inspired by a certain music genre or a band. The game works on any modern portable device without compromising the quality of the graphics.

Images of the music stars from the iconic heavy metal group are the symbols you will come across when playing this 6-reel slot. The RTP of the game is 96.2% and it is listed in the company’s assortment of medium-volatile slots. Reel spinners can place bets from just $0.10 up to $100 and have the chance to win up to 4,500x their stake. What is exceptional about this game is that it uses a Cluster Pays engine, meaning that there are no win lines, but clusters. 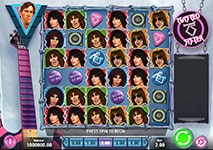 Speakers and guitars are decorating the two sides of the grid. In the upper right corner, the logo of the rock music band is hanging on a plate attached to a chain. Quite unsurprisingly, the slot is accompanied by 2 of the most popular tracks of the band, including “We’re Not Gonna Take It” and “I Wanna Rock”. The colors of the game are bright to lift your mood and provide the game with a fresh look.

The symbols are well-designed to correspond to the theme of the game. The images of the music stars from Twisted Sister, including Dee Snider, Jay Jay French, Eddie “Fingers” Ojeda, Mark “The Animal” Mendoza, and Anthony “A.J.” Pero, are drawn in a cartoonish manner. The slot is action-packed which reflects the band’s high energy and enthusiasm.

As we already mentioned above, the game runs on the Cluster Pays engine. This means that slot enthusiasts need to collect at least 5 matching symbols in a cluster to win a cash prize. The biggest prizes are associated with clusters that contain 25 or more identical symbols. The game features a range of symbols that come with different payouts. The most worthwhile symbols are the ones that depict the images of the music stars from Twisted Sister.

Provided that you land 25 or more symbols depicting Dee Snider, you will pocket a staggering cash prize of 250x your bet. The image of Jay Jay French also comes with a nice winning potential that can boost your bankroll with up to 150x the stake.

The guitar pick has a maximum payout of 40x the stake, while the record sleeve pays 30x the stake for 25+ in a cluster. Assuming that your cluster contains 25 or more symbols depicting the Twisted Sister badge or the record, you will pocket 20x your bet.

With regard to the special symbols in this game, Twisted Sister features 2 wild symbols, and more precisely a regular wild and a wild scatter symbol represented by the Angry Dad. Even though both wild symbols replace all other symbols to help you build a winning combo, only the image of the Angry Dad can grant you access to the free spins bonus round. 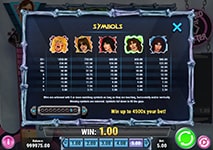 Twisted Sister comes up trumps as far as bonus features are concerned. Among all other things, the slot uses cascading reels, meaning that winning symbols are removed from the reels and new ones drop down to help you build new fortunate clusters. The feature is active as long as you keep on winning.

The game also features a guitar meter that can be charged when you build winning clusters with the image of a band member. Up to 15 charges are possible, but no less than 5 are needed to trigger the Band features that happens on a random basis. Provided that you manage to unlock the Band features, a band member symbol will be randomly selected and corresponding symbols will be affected by the feature. The game has 3 band features as follows:

Another bonus feature associated with this game is called We’re Not Gonna Take It. Whenever an Angry Dad wild scatter comes into view as part of a winning cluster, a segment of the Anger meter is filled. Provided that 4 scatter wilds land on the reels before the win cascade is over, you will unlock the We’re Not Gonna Take It feature.

Once the free spins round commences, the symbols from the triggering spin are cleared from the reels and replaced with new symbols, one of which is a 2×2 Mega Band icon. In addition to that, 4 wild scatters will be locked on the reels. The Mega Band symbol will move towards one of the locked wild scatters.

In the meanwhile, it will clear all low-paying symbols from the grid and form wins with the symbols depicting members of the band. Once the Mega Band symbol reaches its targeted wild scatter, it pushes it from the grid and does the same with the remaining wild scatters until all possibilities for winning clusters are exhausted. To the delight of slot enthusiasts, the Band features are active during the free spins bonus round.

Twisted Sister is a video slot game that runs on the Cluster Pays engine. The game comes with a good-enough number of bonus features that may result in some juicy cash prizes if Lady Luck is on your side. This slot is top of the charts in every aspect, including the animations and the quality of the graphics. Truth to be told, Twisted Sister is far more engaging and entertaining compared to other slots.