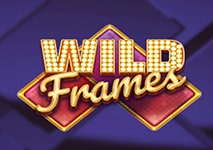 Prepare to go wild with this epic Play’n GO title that is full to the brim with thrilling features. Wild Frames is a game that has taken the classic reels and put one hell of a twist on them. This stylish slot came out at the tail end of 2019 and is bursting with neat functions and attractive animations.

The Wild Frames gameboard has a layout consisting of 7 reels and 7 symbols rows. One of the intriguing things about this one is that there are no paylines. This is because players can form winning combinations from clusters.

Betting ranges have a nice wide span, starting from as little as $0.20 and going up to $100. This allows players that enjoy having a casual spin on the reels and high rollers joining in the fun. With the rewarding RTP of 96.50%, we are in for e treat with this one. 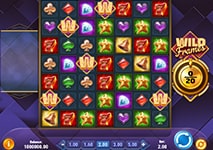 This time around, Play’n GO has gone for a minimalist approach. The Wild Frames game board is a single color, dark blue, with a mustard yellow outline. Beneath the reels, the background of the game is again dark blue with different sized 4-sided shapes in a modern design.

As for the symbols in the game, players will encounter many classic slot symbols with a glitzy twist on them. Among them, you will happen upon the bell, the shiny star, and the fiery red 7.There are also some glamorous aspects to the theme, like the gem-studded Wild icon.

Players will find there are a total of 8 rewarding icons in the paytable. There are 4 low-paying and 4 high-paying ones. The less enticing ones are depicted as playing card suits – clubs, spades, hearts, and diamonds. However, you are going to be interested in the more rewarding ones that are represented by a bell, a gold star, a crystal clear diamond, and a fiery 7.

There is also another fun symbol with a great function – the glitzy W that plays the role of the Wild. It substitutes all other icons on the reels, allowing for bigger and better rewards. 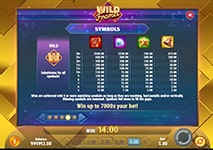 One can form winning combinations by landing matching icons on adjacent reels either horizontally or vertically. You may form these clusters in groups of no less than 5 up to 49.

The highest paying cluster starters from 30 symbols. For landing a group of 30 or more clubs or spades, players will receive 15x the bet. If you for a bunch of 30+ hearts or diamonds, you will win 25x the wager. The bell awards 75x the stake if you land a cluster of 30+, while the star gives 150x the bet. Players that succeed in forming a bunch of 30+ crystal diamonds will receive 250x the wager. And finally, the most rewarding of the lot is the red 7. It gives 500x the stake for landing a group of 30+.

You will notice there is a charge meter on the righthand side of the grid. Courtesy of the cascading symbols feature, this meter can fill and unlock generous bonus features that will help you bag the maximum potential win of 7,000x the bet. The cascading feature is when a winning combination lands on the reels. It will then disappear, thus making room for new icons to cascade down and possibly form new consecutive wins.

When a player manages to make consecutive wins, each symbol that contributed to the win counts as a charge. This will fill the charge meter and unlock features Transform, Shatter, and Wild Card at 20, 40, and 60 charges.

When you unlock the Transform feature at 20 charges, non-suit icons on the grid will turn into a single type of non-suit. This will allow for a higher chance of continuing your winning streak and filling the charge meter. If you manage to get to 40 charges, you will activate the Wild Card. This will randomly distribute 3-6 Wilds on the grid, furthering the opportunity of getting to 60 charges. In the event that you succeed in filling 60 charges, you will trigger the Shatter feature. This will destroy all suit symbols on the grid.

Players will notice that when a Wild lands on the grid, a frame appears around it. This is the namesake of the game and the best feature of all. When you reach 80 charges in the meter, you will successfully have triggered the Wild Frames feature.

Every time a Wild lands on the board, it leaves a frame and transforms other icons that do not form wins into multipliers. These become active when you reach the 80 charges. If you do not land a win, 4-6 Wilds will be randomly placed on the reels. Not only that, but the meter can be overcharged. Every 10 charges over 80 will award another 2 Wild Frames at random.