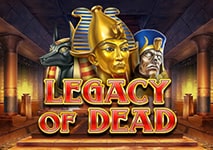 Egyptian slots have been all the rage for quite some time now. Many software providers have been creating games in this genre, and Play’n GO has not strayed from that trend. At the end of 2019, the mass producer of slots released Legacy of Dead. Many people may think that following the crowd is a bit boring, while others love the in-fashion titles.

As is expected from Play’n GO, this slot has crisp graphics and colorful animations that are pleasing to the eye. The soundtrack in the background illustrates the theme perfectly. The grid has 5 reels and 3 symbol rows with 10 adjustable paylines to land your winning combinations on.

Legacy of Dead has a decent RTP of 96.58%, which is above the average 96%. Betting ranges are also quite satisfying, allowing for serious and casual players to enjoy the Egyptian treasures up for grabs. You can wager as little as $0.01 to as much as $500. 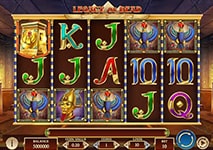 As we mentioned before, Legacy of Dead is a slot with a theme based on Ancient Egypt. If you have played other Egyptian-themed games such as the Book/Ra titles, you will be pretty familiar with the layout of the game, though some of the main animations vary between different takes on the style.

The game is set in a wide space in an ancient Egyptian building, possibly a pyramid or a tomb. Covering the walls are carvings of intriguing hieroglyphs. Some of the symbols that will appear on the reels include Anubis, Isis, and even a Mummy of a Pharaoh.

Players that decide to try out this fun slot are going to encounter a total of 10 different symbols from the paytable. The low-paying ones are represented by playing card values 10, J, Q, K, and A, while the high-paying ones are depicted as various Egyptian-themed illustrations. Those include Isis, the Pharaoh, Anubis, and the Mummy.

You will also happen upon a rewarding bonus symbol while spinning the reels of Legacy of Dead. More specifically, it is the Gold Burial Chamber. This icon plays the role of both the Wild and the Scatter in this game. It may substitute other symbols on the grid to improve and create winning combinations, as well as being the key to unlocking free spins. Players may also form a winning combination from this icon that has a juicy payout. 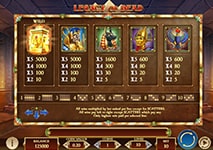 To win a payout, players must form a combination of 3 or more matching low-paying symbols or 2 or more high-paying ones on an active payline. Wins pay from the leftmost reel to the rightmost one.

Players that land 10, J, or Q on the reels in a winning combination of 5 icons will receive a payout of 80 coins. The K and A award 120 coins for landing 5 of a kind on a payline. If you see 5 identical Isis or Pharaoh symbols appear on the reels, you will win 600 coins. Anubis will give out 1,600 coins for landing 5 on a bet way, while the Mummy will award 5,000 coins.

The Wild symbol also pays out 5,000 coins if a player successfully lands 5 on a payline simultaneously. It may also stand in for other icons on the board to contribute to winning combinations, thus boosting players’ wins.

This rewarding symbol, the Gold Burial Chamber, may also act as a Scatter. Landing 3 or more of it on the reels will award the corresponding payout and trigger the free spins bonus feature. If you do land at least 3 of them on the grid, you will be granted 8 free spins to try your luck out on.

But that is not all. The Gold Burial Chamber is by far the most valuable of the icons on the reels. Before you are granted your 8 free spins, you will see a scroll appear on the screen. You will notice all available symbols from the payout table will flicker across the paper until a random one is selected. This one will become your designated expanding symbols for the duration of the feature.

While you are playing your bonus spins, any time your expanding symbol appears on the grid, something amazing will happen. It will spread to cover all the above and below positions with the same symbol, thus elevating your chance of hitting a big win, inching you closer to the maximum payout of 250,000 coins.

Players will also be presented with the opportunity to gamble their prize anytime they land a winning combination. In order to do so, you must select either a suit or a color of a playing card and hope you win. If you do, you could win either double or quadruple the cash.